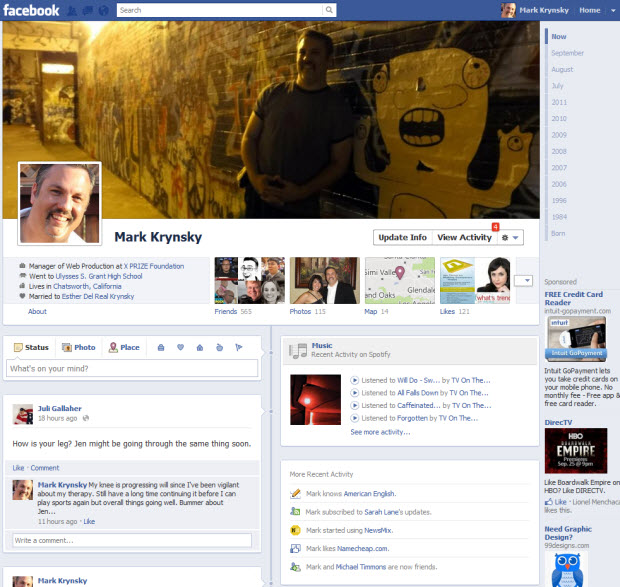 If you had been watching me as I watched Mark Zuckerberg present the new Facebook Timeline you would have seen a smirk on my face. It was also interesting to see how many other people picked up on how Timeline was Facebook’s migration from Newsfeed to Lifestream. I’ve been writing about Lifestreaming here since 2007. As I first discovered the concept that started as a php hack to aggregate multiple RSS feeds to the launch of countless startups all taking very different approaches, I truly felt it would evolve into something big that would eventually make it’s way to the mainstream. Facebook will soon unleash Timeline which takes its cue from many of the Lifestreaming services that preceded it over the last few years.

The “timeline” approach to Lifestreaming, and there have been many different approaches, became pretty popular with several services over the last few years. Recently, Memolane has emerged as one of the more popular ones and very recently I reviewed Glossi which is very nice as well. I liked the timeline approaches but wanted a little more and wrote about wanting a calendar based UI for Lifestreaming in 2009. It’s pretty funny that my mockup for that post used FriendFeed as an example which eventually got bought by Facebook and made co-founder Brett Taylor their CTO, but I digress.

So what are my thoughts on Facebook’s Timeline? Well I think they’ve done a great job building it to visualize our posts and milestones over the years. It also seems that there will be apps that will allow us to segregate sections of it to focus on specific actions such as music, books and movies. I’m a fan of the segregated content approach and Flavors.me is my favorite site in this area. All of that said, I feel that they should have provided timeline as a supplemental view to our existing profiles and not a replacement. The simplicity and consistent experience of viewing the newsfeed when you visit a users profile will soon be gone. Status updates will now begin much further down on profiles pretty much “below the fold”. As we see more custom apps to publish content as boxes in the timeline, you will see a very diverse experience when travelling from profile to profile. I think the majority of users on Facebook will not like this transition as they mainly use the service to communicate and share information with their friends in a simple clean interface and timeline will now become an obstacle to that.

Two other announcements that will have huge implications are the Open Graph and Ticker initiatives. Open Graph will take “Liking” things to a whole new level with the introduction of additional actions that will now appear potentially both on your newsfeed as well as the newly introduced real-time Ticker. So you will be able to share new actions such as “read” a “book”, or “watched” a “movie”. I feel this is a great expansion on the limited nature and context of what “liking” something offered which I wrote about last year in my post on the evolution of likes as social gestures which hinted at the future we are about to see come to fruition.

An interesting aspect of this is that up until now you’ve explicitly shared information by clicking on the like, share, or recommend buttons on Facebook or other websites. Louis Gray wrote a post describing the value of user behavior in regards to explicitly sharing selective content on social networks.  His post questions whether the noise and minutiae of implicit sharing is of any value. As an example users may currently use a service like Getglue or Miso to selectively share tv shows or movies they watch. But in that example you choose what viewing you want to share. Now developers will be modifying or releasing new apps that can take your actions that are occurring natively within a service and automatically share them on Facebook.  So for example a modified Facebook app by Netflix they will add the ability to automatically post everything you watch on the service on Facebook.

I have some mixed feelings about how implicit gestures may get integrated into Facebook. I think it depends on several factors including:

Let me answer these points…

I’m fine with automatically sharing all the music I listen to in real-time because I’ve been doing this already for years scrobbling to Last.fm. For my following example implicit sharing means giving an app or service authorization to continually post an open graph verb / noun combination passively in the background for you while you’re using it. In the case of a music service this becomes “listened” to “song”. The value I’ve gotten from this implicit action is being able to discover new music from my friends that have also been doing it. Facebook is taking scrobbling to a whole new level by aggregating users real-time listening across multiple streaming music services including Spotify, Rdio, Mog, and others directly to the Facebook ticker. The Facebook ticker has been added to the chat sidebar and can easily be hidden away. So in this scenario I think implicit sharing and the method Facebook has implemented it is a good thing on the service.

I do however think that Facebook will run into problems with how developers implement implicit sharing on Facebook using the open graph. My example above is one that I think many people will enjoy and has very few implications from a privacy standpoint other than exposing your crappy music taste to friends. There will be other instances where this will not be the case. My guess is that the process for authorization of apps that leverage the open graph will be in the form of an additional item on the standard Facebook permissions dialog box which people will glance over in the same way they currently check TOS boxes without reading them.  Most people won’t realize that they’ve authorized the implicit sharing to the ticker from apps they grant permission to and we will no doubt hear some horror stories from this in the future.

Chris Saad wrote an analysis of Timeline, Ticker and Open Graph. It generated an interesting conversation over on Google+ that I participated in. His post poses several interesting questions including whether other services will implement similar strategies, whether independent websites will also try to gather their users data in the same ways Facebook now will. He also mentions that Facebook has essentially re-launched the much lauded Beacon product with the release of these features. While Beacon was squarely aimed at creating and leveraging user data for targeted ads, these new features weren’t described to resurrect that…yet. I did however go read up on Beacon a bit to refresh my memory and found this interesting blog post from Zuckerberg apologizing for the Beacon missteps and in it he stated “People need to be able to explicitly choose what they share, [and they need to be able to turn Beacon off completely if they don’t want to use it.]” I have a feeling that with the open graph’s method of implementation Mark will be challenged on this point once again.