I’m currently working on an updated version of the Lifestream service comparison matrix and should have it ready very soon. Having worked on it for a while, it’s easy to see a pattern of feature sets that most services are supporting with some nice unique items available from several services. But in the end the differences are for the most part, just variations on methods of displaying, editing, and interfacing with the data.

Early on I knew creating a Lifestream was a great way to let my friends know what my current interests were and what I was paying attention to, but knew that it would evolve. And I’m not talking about ways that companies could monetize it, I meant the evolution that would take place when some innovative ideas would surface on ways to do something with all of this data.

FriendFeed appears to be the first service that has started working on the evolution of Lifestreaming or should I say Lifestream 2.0 (I tried hard not to say that but couldn’t hold myself back). They have recently addded some features that go beyond the common smorgasbord found at most services.

They have begun to show several stats. The first shows a breakdown of all the feed items posted by your friends. What they do is tally up all the feed updates for each service and provide a pie chart breaking them down. They also in turn provide the same chart specific to your updates as well. On FriendFeed you also have the ability to comment on feed items as well as marking an item as a favorite (flag as “Like”). Based on this data they provide a user bar graph ranking the interest of other members in your feed items which is calculated by their comments and “Likes”. Conversely they provide the same user graph based on your activity of commenting and liking other users feed items. 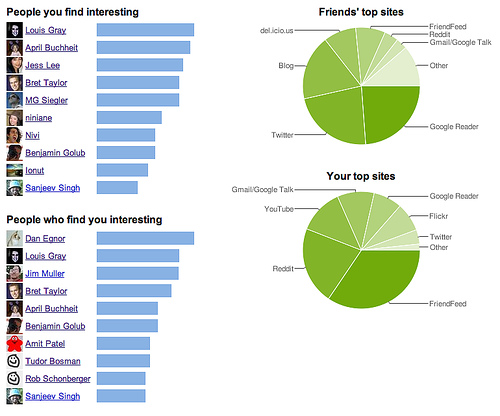 The second feature is a simple recommendation engine. Now on your settings menu, there is a tab which provides a list of other members that you might be interested in following. The text on the heading of the page states “The people below are popular among your friends, and you might find their feeds interesting”. So I’m guessing that they’re looking at the frequency of these users being followed by your friends that you have one degree of separation from.

Below are my current recommendations 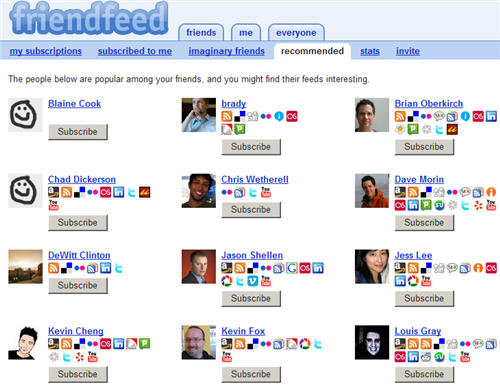 These 2 new features are nothing ground-breaking, but they are a glimpse of what’s coming in the Lifestreaming space. I’m happy to see that FriendFeed is doing some forward thinking here and can’t wait to see what other cool features they and others have in store for us in the months to come.

10 thoughts on “FriendFeed Takes Lifestreaming to the Next Level”