It all started with a poll create by ReadWriteWeb where they asked people what location based mobile apps people were planning to use at SXSW. I left a comment on that post stating that I wanted a multi-checkin service to which Baratunde Thurston showed his excitement for as well, followed by a comment from Martin May of Brightkite stating that he was working on it.

The next day Marshall Kirkpatrick wrote a post eluding to what Martin May had announced and providing some thoughts and details on what a universal checkin service might provide. Just 12 days later RWW writes about a website created for a new service called Check.in which emerges showing what Martin and his team have been working on. 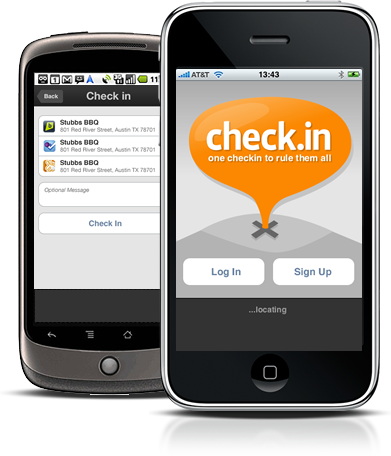 Well Check.in has now been opened up for beta testing and several people have started to use it. MG Siegler wrote a post about it over at TechCrunch a few days ago exclaiming how it’s “potentially a brilliant remedy for checkin fatigue” which I totally agree with. You can go read MG’s post to get some more details and perspective on the service but I decided to record a video showing you the service in action.

As you can see it’s a nice simple way to checkin to Brightkite, Foursquare, and Gowalla. Not only do you avoid the need to run each app separately but you also save a ton of time because it bypasses redundancies and additional data being pulled from each of the services as well. After using it for several days I’m really enjoying the minimalist approach to simply checking in.

That being said, you will still need to load native apps in cases where you want to view some of the additional functionality from each of them such as viewing friends that may also be at the location, viewing trending areas near you, sharing or viewing photos from your venue, or any other unique features native to each service.

While Check.in currently supports the top gaming based LBS’s It will also be nice when they add support for others such as Loopt, Whrrl, Yelp and others. Moving forward it would also be great if features beyond the checkin get added to also take advantage of universal features across services such as being able to post a photo to multiple services or aggregate friends data to be displayed from multiple services within Check.in.

I look forward to watching this service evolve and continue to make the splintered hassle of participating across all of these services a lot more manageable.

So if you’re interesting in trying the service out the folks at Check.in have offered to provide 50 invites for readers of Lifestream Blog who retweet this post and follow the checkdotin account on Twitter so they can DM you the invite code.

16 thoughts on “Your Checkins are About to Get a Whole Lot Easier with Check.in”