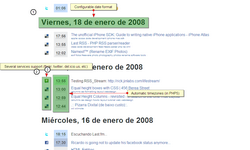 A new version of the RSS Stream WordPress Plugin from Ricardo Gonazles was released. This new version allows for the addition of multiple generic feeds. Keep in mind that this plugin requires PHP version 5 so if you are on a hosted server you need to verify the version that your site is running on. You can view a live demo of the plugin on his site here.

A recent post of the SimpleLife WordPress Plugin states the following features will be coming soon: