It appears that lately mobile devices are becoming the catalysts for Lifestreaming. Last week I wrote about Nokia’s new Lifestreaming initiatives and today at the Mobilizer conference in San Francisco Motorola unveiled their first Android phone. The phone is called the Motorola Cliq. I’ve read quite a few posts on this new phone as well as watched video of it in action. I also watched the presentation and subsequent Mashable interview of Motorola Co-CEO Dr. Sanjay Jha.

In both the presentation and interview Sanjay focuses on the feed aggregation features of the device. Along with aggregation you can puplish status updates simultaneously across multiple sites all at once. After watching Sanjay in both videos it is clear to me Lifestreaming was designed to be front and center with this phone.

Motoblur is being referred to as a skin in many articles but it actually appears to be a collection of widgets that provide most of the phones features. I also think Motoblur has a service layer as well because in the presentation they discuss that it stores all your social media profiles along with authentication to keep the things fluid and simple. Also if your phone is lost or stolen you can re-authenticate with the service on a new phone. 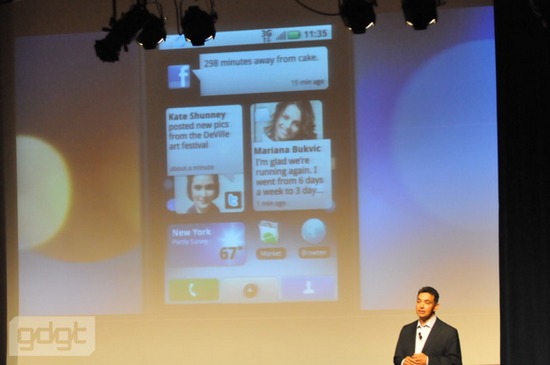 Hands-on with the Motorola Cliq

Here are more resources available for the Motorola Cliq