Vibstars is a Social Networking site based in France that appears to have been built as a platform to share web content with friends. That of course is the a primary goal of Lifestreaming so it makes sense that they add aggregation services to the site. 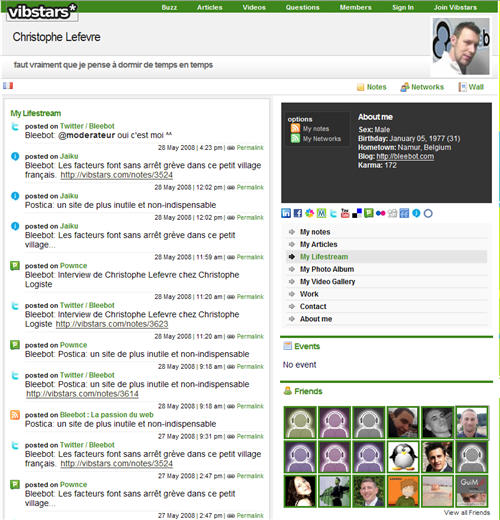 Vibstars currently support 19 services. If you want to try out Vibstars and add a Lifestream take a look at the blog post describing the addition of the functionality here. It took me a while to figure out you had to click on the “Edit my pages” to be able to access the Lifestream functionality.

I believeÂ the addition of Lifestreaming on Vibstars is part of a growing trend occurring triggered byÂ Facebook opening up their newsfeed (see Facebook’s Lifestream Adds More Services). I think that Facebook’s entrance into the Lifestreaming service game will push theÂ proliferation of it being added to many other sites moving forward.

You can check out my Vibstars page here.