Puddle is a self hosted lifestreaming script created as a side project from mobile game developer, OrangePascal. Puddle is simple to setup with no need for a database and can get you quickly up and running with it’s easy to use interface. This script—being young—still has a few hurdles to get over, but it’s promising feature-set could lead to an excellent self-hosted lifestreaming solution.

Kicking off the testing of Puddle was a pleasure as I simply needed to upload the script and I was ready to start adding services. The readme suggested setting the directory’s permission to 777, but I didn’t feel comfortable with this so I left mine at 755 and it is working just fine. The service adding interface is simple but elegant with nice AJAX menus that are nicely categorized. Puddle supports 36 service including a wide range of service types.

Puddle treats each imported item more like blog posts, instead of highly condensed items like most services. Puddle also can be used as your blogging system as it has the ability to create posts with a nice TinyMCE editor. Treating all items in this manner allows for easy integration with Disqus commenting system, which the script natively supports. The sidebar is fully customizable with the built-in plugins or with HTML/Text modules.

The script has some nice features that are often overlooked in things like lifestream plugins for WordPress. Chief among them is the importing and displaying some of the gathered data above and beyond just links. Services like Flickr and Vimeo have options for just importing your uploaded media or also including the “Liked” media. Tumblr imports the actual media posted instead of just a link to the original page. And Brightkite imports will display a small Google Map with pushpin identifying the location. 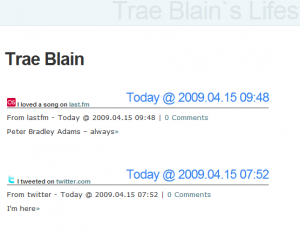 As I said, this system is young. Although the setup was so simple and fun I was surprised when I had to add a cronjob to get the script to update from the services. Something so simple to run should offer a pseudo or simulated cron system in the backend to update the services on its own. Also, again due to it’s age, there’s not much documentation. I dove into a couple of the themes and although it doesn’t appear to be a difficult theming system, someone that doesn’t have much knowledge in php will feel a bit uncomfortable.

If you are looking for self-hosted solution for your lifestream, Puddle is a great start.  The script is hosted at Google Code and open sources so you can modify it to your hearts content.