If you haven’t heard of SimplePie let me tell you that it’s a great PHP library that can be used to do all kinds of things with RSS or Atom feeds. I have used it as a raw library as well as the core library for both WordPress Plugins and Drupal Modules. It’s fairly simple to use, powerful and has good caching which is necessary when working with RSS feeds.

I came across this tutorial a while back and wanted to share it with you as it provides both a good tutorial for using SimplePie along with the application of building a Lifestream with it. If you’ve ever considered getting your feet wet with some simple PHP coding and think building a Lifestream from scratch to learn that, well you’ve found the right place for that. 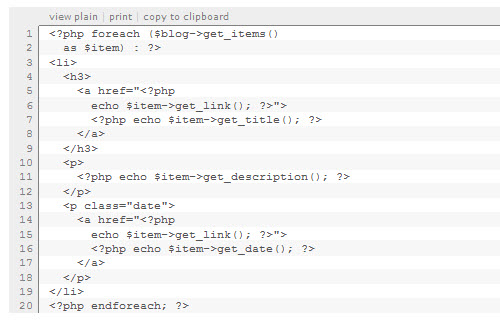 Here’s the intro to the tutorial

In this tutorial we’ll build a page that gathers up the RSS feeds of all those little bits of your life and presents them all together in one spot. To do that, we’ll use SimplePie, a feed parsing class written in PHP. It’s powerful, it’s open source, and it’s easy to use. We’ll then hack on the output a little, and make it all look gorgeous with HTML and CSS. The techniques we’ll cover are also useful if you find that you need to aggregate RSS from many sources, like a news page.

via Build a Lifestream with SimplePie | Sitepoint.com.