Here is what Appadvice had to say

AIM now features all kinds of new ways to interact with your friends and family via Lifestream.  When you first launch the app, you will notice the addition of the Lifestream tab at the bottom of the screen.  When accessed, it will allow you to set up an account through Safari if you haven’t already.  Lifestream is able to pull in updates from other services, such as Twitter, Facebook, and Digg, so you won’t have to jump from app to app to keep in touch.  You can also comment on those status updates from the app, view photos, and even filter through the content to find exactly what you are looking for. 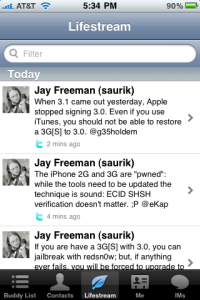 Of note is that there are 2 versions of the AIM app for the iPhone. A free ad supported version which does not yet have Lifestreaming functionality or the $2.99 version without ads that does. No word on when the free one will be adding Lifestreaming.

I found out about this from Steve Rubel who has posted some of his thoughts on the release as well.