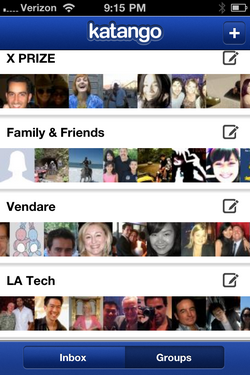 The release of Google+ has garnered much attention for their “Circles” functionality that allows people to manually create groups of people that they can selectively share with on their new social network. This functionality has rekindled the discussion about creating groups to define people within our social graphs. Behavior across networks has shown that most people don’t want to take the time or be bothered with having to manually create these groups. Yesterday we saw the release of Katango which is an app for the iPhone that will go through your Facebook account and create groups of people automatically based on their custom algorithm.

I tested out the app and it does a pretty good job. It created 11 groups for me. Some where based on some simple logic such as creating them based on co-workers from specific companies or from students of the same school as myself, or based on location. But there were a few groups that look to have been created based on my interactions with those users on Facebook. That’s the area that is of most interest to me. In this world of “friendships” that far exceed the Dunbar number and with an ever increasing number of items people are sharing on a daily basis, we need to find better ways to filter it. This is an ongoing problem that many companies are trying to solve using many different methods.

While I like to participate on social networks I realize that I can’t possibly see all the content shared by my friends on a daily basis. That’s why I’ve come to rely on several different social reader apps that use logic to find the most popular or shared items across them for me. I wrote a post where I compared several of them and continue to focus on this area. Currently one of my favorites is Tweeted Times which prioritizes links shared on Twitter based on the number of people whom I follow have shared. This is updated every few hours and you can see my current page here.

While this method is pretty good there is a ton of other data based on my Twitter behavior that could be used to improve it. For instance it would be great if based on my behavior a ranking could be created for the people I follow on Twitter. So lets say that every time I RT or @reply or favorite a tweet that increased the ranking of the user who’s tweet that behavior was directed to. Similar behaviors could be applied to users of other networks. For instance if I liked, or shared or commented on a YouTube video. I recently was on the Tummelvision podcast and on there discussed how Klout is great for doing a global ranking and I can see the usefulness of that in some perspectives, but that ranking doesn’t translate to each of us as individuals. What I’m proposing is that we each have our own unique ranking for people in our social graphs based on our behaviors and interactions with them across multiple networks. If there could be a way to harness that so it could be applied to social content readers or help us to share selectively with much better intelligence, we could each truly have a dynamic personalized experience tailor made for each of us.

Based on what I read about Katango over at TechCrunch. They have their eyes on a much bigger prize than this trivial Facebook grouping app they just released.

But the iPhone app launching today is really a proving ground for the technology. Eventually Katango plans to let other services and apps tap into its algorithms, allowing them to integrate its auto-grouping functionality (this wouldn’t be a purely benevolent move, either — Katango would also be able to improve its algorithms from that additional data). And the Katango will eventually be on other platforms, like Android, and a web-based version of the app. Katango is tackling an immensely challenging problem, but if they get it right, the resulting engine would be invaluable.

I also read over on AllThingsD that they plan to add support for Twitter and LinkedIn as well in the future. Lastly you can get some more insight from Louis Gray who spent some time at their offices and also wrote a great review here.

Between the sudden surge in apps and services that are trying to identify personalized content for us and the emergence of services like Katango to make better sense of how we filter, share, and interact with slices of our social graph, I think we will truly start to see some major innovations in helping us sift through all these needles in the haystacks.