The other day I saw Chris Prillo sent out a message announcing that he was launching Lockergnome.net as a free WordPress blog / Lifestream Archive. Of course I quickly had to go see what Chris was up to here. Here’s a post where Chris explains why you should sign up for the service. 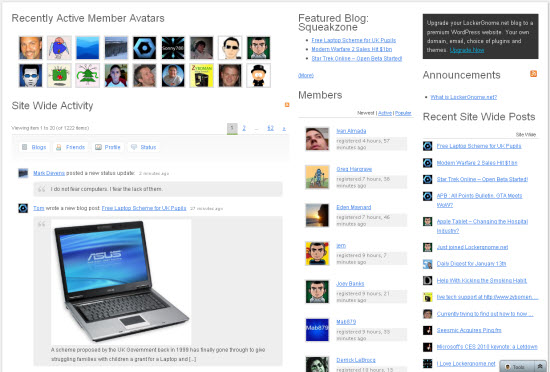 After visiting the site I realized that Chris was using BuddyPress to power it. Buddypress is a way to add a social network layer on top of WordPress MU. I then started to test the site out and later saw that Chris had left me a message on it. I asked him about the motivation for creating the service which he responded to in a follow up post where he stated the following:

Ok fair enough, I can dig those reasons. So with BuddyPress, users can sign up and create their own blogs on the service utilizing WordPress. To enable the Lifestreaming functionality, every blog has an install of the very popular WP Lifestream plugin. Also, they’ve setup the microblog inspired P2 theme as the default and only selection available with the free service. Premium accounts are available for $12.77 a month and powered by Page.ly which presumably will allow you to gain complete control over the blog as you would have from a standard self-hosted deployment allowing tweaks and installation of additional plugins and themes. 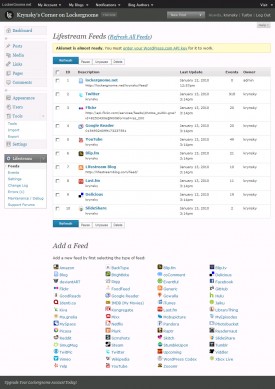 When I first heard about the release of BuddyPress I quickly thought about how this could be used as a tool to create your own private Lifestreaming community which is exactly what he’s done here. Unfortunately the actual Lifestream activity itself seems to be relegated to the individual user blogs themselves and doesn’t appear on the home page under the “Site Wide Activity” which I think would be a nicer implementation that would expose user activity to the whole community. As it stands that section displays blog posts by users, wire posts (think Facebook Wall posts), and inter-network activity such as friending notifications. I’d really like to see the Lifestreaming activity integrated more.

Chris has created a pretty geeky and tech-centric community and connecting with that crowd on its own merit is a worthy reason for joining the service. Besides that you can also join to play around with a live BuddyPress implementation. Lastly, if you’ve heard about the WP Lifestream and always wanted to play with it but either don’t have a WordPress site or didn’t yet feel comfortable installing it, you can now test it easily for free. Just remember you need to create a blog after you sign up to get access to WordPress and the plugin.

Finally if you’re interested in setting up your own multi-user Lifestreaming community I’ve compiled a list of several options that are available besides BuddyPress. I’ll continue to watch the community on Lockergnome and you can connect with me here if you decide to try it out.

Added screencast of the service