CNN released 2 stories on Lifestreaming this week. The first is titled “Do digital diaries mess up your brain?” written by Elizabeth Landau which provides some very interesting information with regards to Lifestreaming. It begins providing some background about Gordon Bell and the Sensecam which will finally be released soon. But the story goes on to also discuss how the current suite of services including Blogs, Facebook, and Twitter are now providing additional opportunities to stream our lives. Then the story takes a bit of a different turn

If we rely on technology for documenting, sorting and storing information — creating digital diaries, or “lifestreaming” — what will become of our minds? Although there is not a lot of research on this subject, psychologists have a range of opinions about where we’re headed.

It goes on to talk about the effects on the brain and how learning to use the technologies that allow us to Lifestream offer an important way to keep the mind stimulated much like puzzles. The future is discussed where it may be possible to do most of this using a microchip implanted in the brain. Another positive effect of Lifestreaming could offer is extending the cognitive life of Alzheimer’s patients by 10 years by presenting them with their own memories.

But there are some more insightful effects that can be negative that are pointed out. This particular paragraph provided me with some introspection regarding how I’ve been affected by my personal Lifestreaming.

But recording everything you do takes people out of the “here and now,” psychologists say. Constant documenting may make people less thoughtful about and engaged in what they’re doing because they are focused on the recording process, Schwartz said. Moreover, if these documented memories are available to others, people may actually do things differently.

This statement offers a pretty big revelation that I’m personally guilty of and have witnessed in others. Sarah Perez wrote a great story earlier this year precisely about this issue asking if “we’re forgetting to live”. I recently went to see U2 at the Rose Bowl in Pasadena and this was the epitome of what the story discussed. My eyes circled the rows in front of me and all around during the show where I viewed an overwhelming number of people who were glued to their cell phones sending out updates. I too was doing this mostly to send out photos through my stream but I was conscious of the phenomenon ocurring and really tried to limit my time spent doing this so I could enjoy the show. One guy in front of me spent the whole show recording a video of it on his digital compact camera…doh!

The second part of that paragraph is also very interesting. I can totally see how we may modify our behavior at an event specifically because of how we want to be perceived or be a character in the conversation that will make its way to Twitter and other social networks. The story provides quite a good read and I highly recommend you go read it.

The second story was titled “My week of recording a digital memory” written by John D. Sutter in which he took on the role of creating what I’d consider a pretty extreme version of a Lifestream where he attempted to record everything he did using either video or audio. 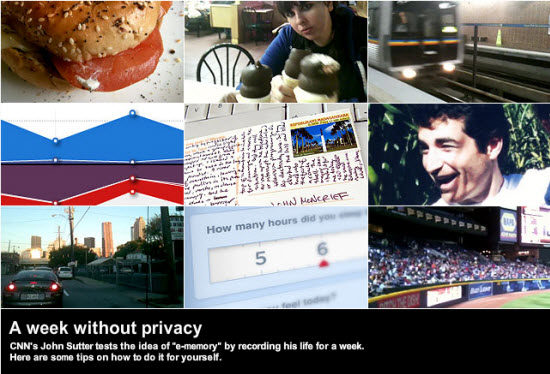 I personally think this goes too far, and John came to the same conclusion, but it was an interesting experiment nonetheless. He also discussed how the process interfered  and caused him to miss ‘living’ but did see value in being able to “store and curate a digital memory of highlights”.

He goes on to detail his process and gives tips along the way such as keeping video clips short, record what you can store, and try to track one thing at a time. That last tip was in reference to his desire to being able to glean something about his health, reading patterns, sleep cycles or work efficiency as part of the experiment. The problem was that by tracking all of those at once, he felt scatter-brained and states that focusing on one activity would have offered more insight.

Not only did CNN cover Lifestreaming with these 2 stories, but they also recorded a video segment which I’ve provided below where both Elizabeth and John are interviewed about their stories and experience.

These were 2 very well done stories on Lifestreaming that I really enjoyed and look forward to more such pieces that delve deeper into Lifestreaming coming from other more mainstream media outlets in the future.