There are several sites out there allowing us to add ourselves to lists describing our skills, specialties or other information about ourselves. Wefollow is a popular one and I’ve also  seen many use Twibes as well. That’s fine and dandy but we know many folks see themselves as things they clearly are not. For instance I’d be very leery of many people who add themselves to a “social media expert” list.

A few weeks ago I was talking to Jesse Stay (developer of  SocialToo) about an idea I had to create an identity page for people on Twitter by building a tag cloud to analyze the keywords made up from the lists they’re on. Jesse who seems to know about every Twitter app out there  told me that there already was one and sent me the info. So I visited the site and gave it a try.

Here’s the page it created for me 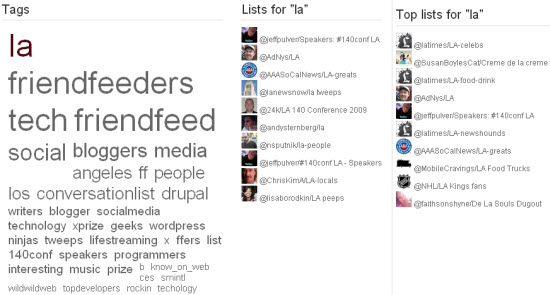 You can see in the image all the keywords used to describe me based on the 142 lists I am currently on. The more times the word is used, the bigger it appears on my tag cloud. You can also click on any of the words in the cloud and it displays the lists you are on that use it and the people that put you on them. Lastly as a nice discovery feature it displays the top followed lists on Twitter for that given keyword.

This app was created by Mustexist and you can go create your cloud here. It’s pretty enlightening to see the keywords that other folks use to describe you. I also feel that it paints a much more realistic picture of who people are by crowdsourcing that info as opposed to taking people by their own word. I’d imagine that many “social media experts” may end up with the biggest keyword in their cloud being “douchebag”.

One of the additional aspects of Twitter Lists is that it now provides a new datapoint to help in the ways we can calculate influence and define users. I’m also a big fan of Favstar.fm and what they’re doing. Favorites would be another great datapoint to add to the mix but it doesn’t seem many people use it enough for it to be useful at the current time. I’m hoping that will change.

Initially the only measure of influence on Twitter was based on number of followers. It’s nice to see that as the service is maturing we are seeing features that offer better ways to help expose many other great people on the service. There are some services out there that are tackling this like Klout and Tweetrank. Yesterday Twitter announced the revamp of their controversial suggested user list. While not perfect it is a step in the right direction.