Last year ther conversation had already started on how to tame the social media firehose. There were many discussions from folks about noisy data. We were still in the early statges of adoption so concerns at the time hadn’t really penetrated to too many users. It was mainly those that chose to track a redonkulous amount of stuff.

I’m a pretty active user on FriendFeed and this problem has recently been gaining steam with many users becoming vocal about it. When I first joined FriendFeed the majority of the users I saw on there were really focused on cutting edge web and technology. It made for a fantasitic peer filter that bubbled up the good stuff making it easier than having to hunt for stuff through my RSS feeds. As FriendFeed began to grow larger it also attracted a more diverse set of users. FriendFeed has now become a true social network. There are now groups of users focused on many different topics, whether it be photography, technology, or bacon. I have truly enjoyed this diverse mix of folks but the growth hasn’t been appreciated by everyone. While I am passionate about the web and technology, I also enjoy the occasional LOLcat and enjoy talking about and sharing other stuff as well. But there are many users who don’t share my sentiment who have been complaining whenever the service gets flooded with a specific topic or a meme catches on.

Yes, FriendFeed has some useful tools to help curb the issues somewhat, like the ability to create lists, hide individual items, users, and feeds. You can also turn off the friend of a friend feature. But I find these levers to be a bit overwhelming for many to use and understand and would prefer some better and simpler options. I also think that in the long run they will be necessary for the community to be pacified and allow it to grow.

So what can be done? Well while I don’t have the perfect answer there are definitely some more that could help. Also keep in mind this can be applied to any Lifestreaming service even though I’m using FriendFeed as the example. I think for starters, probably the quickest and easiest thing is to add support for tags. Tags are available for many of the feeds that are being imported including Delicious, Google Reader, Flickr, YouTube, blogs (and in turn comments), etc. By adding subscriptions with tag filtering support, you could subscribe to users who either provide a 100% match of their stream on a topic of interest or just 20% of it hiding the rest. The methods and implementation need to be thought out more, but I think adding support for tags with filtering would be great and hope to see this adopted soon.

FriendFeed user Austin King has also spent quite a bit of time thinking about this issue as well. In fact he’s begun a project that attempts to tackle it.

Here’s a snip from a recent post of his on the subject:

Maybe what we need is to make our “Social Identities” first class objects. Erving Goffman helped us understand that people have many social identities. The idea of this experiment is not about hiding things from people. The fact that a dominant facet of your life is the Furry community is something you can better capture with this service, but not something you would be able to cloak. This is about being polite and helpful by creating channels of activity across the various facets of your life and your communities.

Here’s a video he created to demonstrate his idea

A Sketch of OFace from Austin King on Vimeo.

You can read the rest of Austin’s post here.

Another new service which is currently in private beta called Kakuteru (read review by Mike Fruchter on Louisgray.com here) is building some powerful functionality on the back of FriendFeed. When you create an account and import your data into their service they provide many features that include customizing the design, hosting on your own domain, and providing analytics. But the other thing they do as it relates to this story is that they create tags based on your stream. Below is a picture of my current page on Kakuteru where you can see my tag cloud. 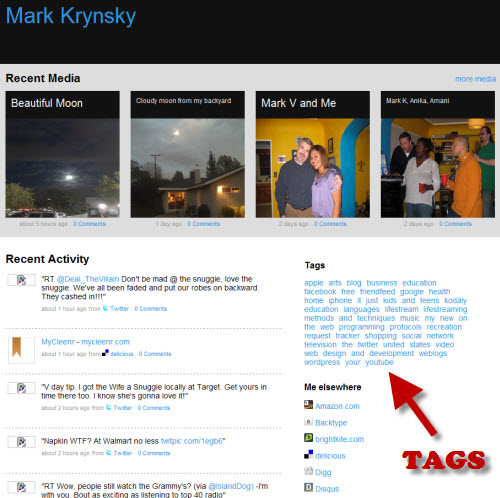 Lastly, I saw the release of a new service a few days ago called SocialWhois.com. The site was developed by FriendFeed user Directeur. His primary pitch for the site is the following:

This website is a proof of concept that a better Social Media can exist ; a social media based on interests and “personal relevancy” instead of popularity. And this, really is the next step in social media!

This is a very interesting service that can provide many different uses but the key here is that it also has the ability to import your FriendFeed data and to achieve the goal of providing relevancy, they automatically generate keywords (tags) which you can also edit to show what your interests are. Below is a screenshot of my SocailWhois profile. 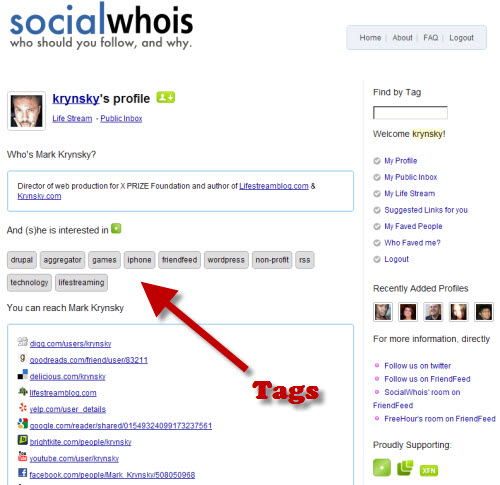 So there you have it. Several different takes on how to help filter and segment data to either make it more relevant to our interests or to filter based on what the current content types we want to consume. Lifestreaming services really need to focus on this area soon. I really haven’t seen any innovation in the Lifestreaming sector as of late, just minor evolution. Someone really needs to find a way to tackle this ever growing issue and hopefully do it sooner than later. It can clearly make Lifestreaming a strong differentiator from other social networks as well as create a compelling reason for more users to move towards it.

4 thoughts on “FriendFeed and Other Lifestreaming Services Need Filtering & Segmentation”