Today I came across the Felton Report. What is this report? Well I see a beautiful visual Lifestream. It was created by one Nicholas Felton who is a graphic designer based in New York City. He is also the co-creator of the data-tracking website Daytum.com. I had recently signed up and gotten access to this site which is currently in private beta. On the surface it appeared to be a Lifestreaming site but after playing around for a little it appears to only provide the ability to create lists and data sets manually to generate your stream data and offers no ability to import data or from link to a 3rd party service.

The images below are from 2 pages of his report and show the uniquely interesting method he has used to visualize his Lifestreaming data. I would be interested in getting more information on the tools he used to aggregate the data because as I mentioned I didn’t see that ability in his Daytum service. 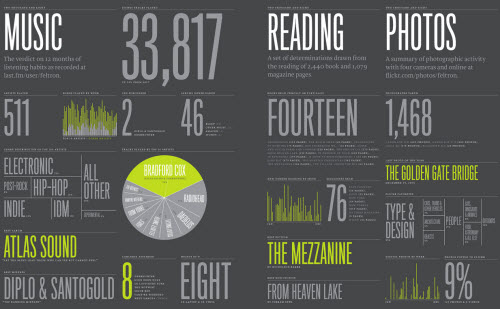 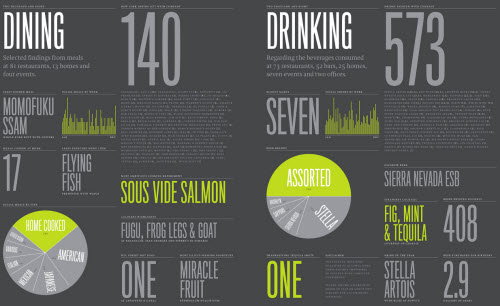 You can view the whole report here. He also has other annual reports and design work which can be found online at his site feltron.com and mgfn.net.

1 thought on “Introducing the Lifestreaming Visualization Stylings of Nicholas Felton”