There is much talk about measuring influence lately. Most of the discussions surrounding it are based around people’s activity on social media services. Klout is a service that has emerged as a current leader when it comes to trying to determine influence for people. They do a pretty good job of calculating this based on many characteristics of user activity on Twitter and now Facebook. Unfortunately this only tells a small portion of the influence story for people.

Yesterday I wrote a blog post and over time I watched some activity surrounding it on Twitter. There was one tweet from Jesse Newhart that also got retweeted by 3 other folks, all of which have some significant influence according to Klout. 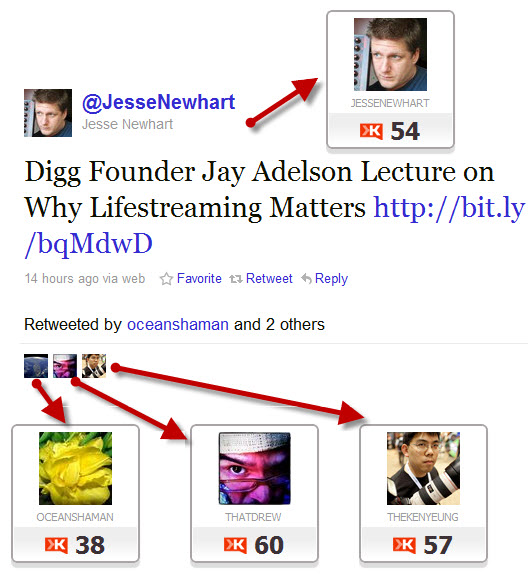 So what’s the problem here? None of this activity will affect my Klout score. While the secret sauce to Klout’s algorithm isn’t public, we know that they factor retweets in the scoring. But a tweet needs to have the originator’s @ referenced within it for any inclusion in the scoring. So as far as Klout is concerned these actions around my blog post are invisible. Making some assumptions about the tweet example above, Jesse Newhart will gain some influence scoring whereas I (the creator of the content that Jesse shared) would gain none. I gave this some thought and it elicited all kinds of issues around user activity that Klout is missing as well as trying to determine how a service like them could go about including it.

While Twitter is a great service and definitely has its place as a factor in calculating influence, there are so many other factors that need consideration. Blogging is a social media activity that arguably should garner a larger level of influence over a tweet if measured in a similar fashion. So I started to ask myself what metrics could be used to calculate blogger scoring and how could a service like Klout incorporate this information into their scoring?

So I started to do a brain dump on some ways that you could aggregate some data points from third party metrics to try and create an influence score for blogging. There are quite a few ways that this could be done.

The numbers generated around the above activities provided by the third party services could be used to provide a blogger influence score. For Klout to implement this they would need to somehow allow their users to claim blogs and associate them with their accounts or perhaps the data could be inherited by partnering with some of the above services.

Today I saw a blog post on the Top 10 Most Influential Independent PR Bloggers on Twitter. This top 10 list ranked PR bloggers calculated only using their Klout scores.  I’m curious how these rankings would have been affected by using the blog activity metrics I list above? This list is a prime example of why only using a Klout score for ranking is troublesome and I’ve seen similar ones.

I would love to see a blogger score metric used as a calculation in a person’s influence. In fact I personally would put more weight behind this value in an overall influence score. Other areas of the Klout summary could benefit from this data as well including the topic summary to paint a better picture about a users knowledge. We are still in the early stages of measuring and determining influence. Using data to help calculate it is tricky, but I don’t feel the full story is being told and I’m looking forward to watching tools and services evolve in this area.

UPDATE: After reading the comment from Mahendra Palsule below I read his posts and testing out Peerindex. I started to type a reply but it grew to become more useful as an update

I went ahead and read both (post 1 & post 2) of your blog posts that provide insight into their service. I then also read about how they calculate their scores. Unfortunately as you’ve stated, although they let you add your blogs, they don’t currently seem to factor any of its metrics into their calculations.

Also, aside from their different methodology of ranking influence from Klout, I don’t find their user summary pages to be anywhere near as useful or accurate. When comparing my topics on Peerindex to Klout, I found Klout’s to not only be more accurate but also much more targeted than the broad ones used by Peerindex (Why is Robert Scoble listed as a topic for me?). I’m not sure how Klout calculates this but it appears that it may be based on the frequency of keywords used in the lists I’ve been added to if this service that creates a tag cloud I found a while back is any indication. In any case, it’s more accurate.

Also, the descriptions of how the 3 scores (Authority, Activity, and Audience) are calculated are a bit cryptic. For instance “Too much irrelevant activity can hurt your overall activity score” what is considered irrelevant? Also, “At PeerIndex, we look at the content your share, including the links you recommend, and score it against other members of a given topic.” It doesn’t look like they’re tracking more than a small number of high level topics, what about those that don’t fall into this category?

On Klout they provide some simple insight about some factors on how your score is being calculated with their use of descriptive achievement badges. They also provide even more details regarding people with their Klout classification. So while I don’t deny that Peerindex may take more data into account, ultimately it’s the way you present that data to users that will determine its usefulness. I will continue to follow Peerindex as well to see how they improve the service.