I came across this photo today while visiting this page at Somewhatfrank.com 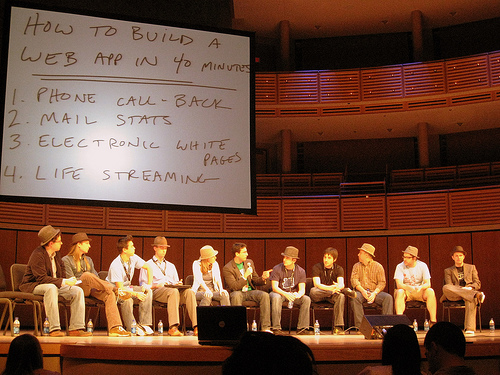 The photo was taken at the Future of Web Apps (better known as #FOWA on Twitter) Conference. It was at a panel discussion where the basic premise for the group was to be tasked with coming up with a compelling web app in 40 minutes.

Eric Schonfeld (from TechCrunch) was one of the members on the panel and he wrote a post about it. What’s also interesting is that he had written a post with a poll prior to the panel asking TechCrunch readers to choose an app they wanted pitched at the panel. Lifestreaming was one of the choices and Eric ran with it trying to define the notion of a next generation Lifestreaming app. During his pitch it was interesting to hear him discuss what Lifestreaming was which in and of itself can be a difficult task as it means many different things to different people. <tangent>I’m still wondering if a Wikipedia veteran can help create the Lifestreaming page which is being redirected to Lifecasting</tangent> I can only imagine the deer in the headlights look some people must have had.

The only reason I know about all this information is because I found this video of the panel discussion. Eric’s pitch is near the beginning if you’re interested. Not much else to report here except it is clear that Lifestreaming is definitely the buzz word of 2008 and it will no doubt be the breakout year.

2 thoughts on “Lifestreaming App Built in 40 Minutes at FOWA?”