Today I came across an interesting development project called 3D Lifestream created by Nick Selvaggio. Nick is the author of the Lifestream module for Drupal that exposes Lifestream data created by the Activity Stream module and provides an interface for Flash/Flex apps. 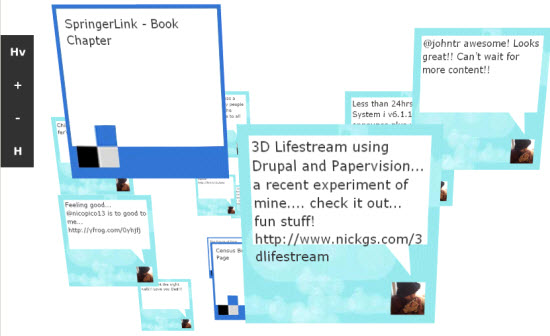 So Nick took his Lifestream data from Drupal and using his module connected it to the Papervision library which is a toolkit for creating 3D objects and animation in Flash. He provides some details on how he went about creating this mashup and provides a download of the .fla file used to create the .swf. so that anyone else interested can get a jumpstart on creating their own version.

I played with his demo (screencast below) a bit which wasn’t too exciting since it was only Tweets and Delicious links which actually didn’t link out for me. It would have been nice to see photos or videos but overall it’s demo of the concept that matters here which pretty cool and could be used for some interesting 3D visualization that include multiple users streams or other rich 3D content as well.

I recorded a quick little screencast to show this to you

3 thoughts on “Lifestreaming Goes 3D Courtesy of Drupal and Papervision”