My Talk With Louis Gray About Lifestreaming 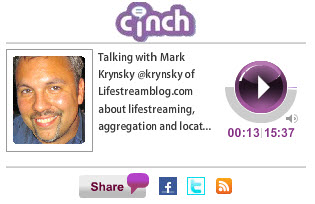 Last night Louis Gray gave me a call to talk about some recent topics I have been writing about and my thoughts on the current state of Lifestreaming and where it’s going. I discussed how I want to see a content reader developed based on LIfestream data and my thoughts on the value of the checkin which I feel haven’t really been realized. We also discussed the state of several services such as FriendFeed, Google Buzz, Facebook, and Cliqset as they relate to Lifestreaming.


Louis has several other great talks that include Darren Bounds from Lifestreaming service Cliqset, Dare Obasanjo who works on Microsoft’s Lifestreaming efforts, and Jay Air from TheCadmus which is a service that touches on some of the features I’ve proposed for a content reader.