I have noticed a recent surge in users starting to use and adopt Posterous. One of the biggest reasons for this was the proclamation by Steve Rubel that he was killing his blog in favor of Lifestreaming and choosing to use Posterous as his new platform. As a result Steve has become the poster boy for Posterous (pun intended) attracting many people to try the service. His move caused a huge reaction on the web, some of which wasn’t positive. In a recent interview with Posteruous founder Sachin Argawal, he also acknowledged Steve’s use of Lifestreaming as a term that best describes his service.  I recently met Steve and told him that while I was happy he had brought huge attention to Lifestreaming, I believe that many people are confused by the term. My hope is to try and clarify some of that confusion here.

First off,  I’m not the Lifestram Nazi dictating what method you should use to create and populate your Lifestream. However, the concept that I cover is primarily as a way to aggregate the content we create or like on a multitude of services into a central location. To that point I wanted to show how Posterous is positioned with that method of Lifestreaming. Below I have provided what should hopefully be a clear diagram showing the differences between Posterous and the Lifestreeaming method I described. 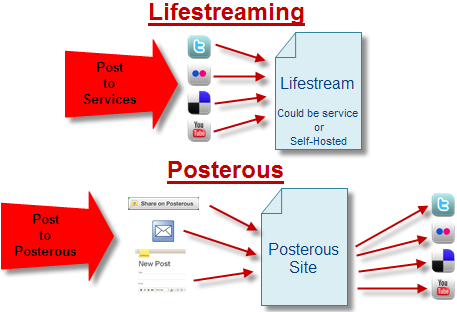 Using the Lifestreaming method you post to various web services and then aggregate the content generated at each of them on your Lifestream. Your Lifestream can be located at a service like FriendFeed, Storytlr or many others, or it can be self hosted using WordPress, SweetCron or many other options as well.

Posterous uses a different methodology in which you post all your content to their service first via email, bookmarklet, or a custom form and then optionally autopost that content to external services such as Twitter, Flickr, Delicious, and Youtube. The options for posting by email are flexible and powerful. You can specify which of the external services you want to autopost to on a per email basis by using  specific settings.

One of the biggest differences gleaned from these 2 methods is that a Lifestream allows the ability to publish from a limitless number of external sources that provide either an RSS feed or access via API whereas Posterous is limited by whatever can be published using their tools. For example, if I decide to “love” a track on Last.fm or add a book I’m reading at Goodreads, those actions can be automatically setup to publish to my Lifestream. In those examples I can use the native tools on the respective site to publish content to my Lifestream without having to do anything special. It would require me to take an extra step to do the same on Posterous. So basically Posterous is limited to the content you publish using their tools because they don’t offer the ability to import content from external sources. Until they offer this, I don’t consider them as a true Lifestreaming service. By the way, I see this as one of the key differentiators between Posterous and Tumblr which it is often compared to.

Now that just explains the differences in methodologies. It’s not to say that one couldn’t effectively use Posterous as a Lifestream or even find ways to incorporate generating content at external sites in a meaningful way on Posterous. In fact, many people are doing just that. I just wanted to bring some clarity to the differeces as I see them.  I have been enjoying using Posterous and find its posting and workflow options to be very powerful. There is a lot more to the service as well than just what I’ve covered here. Also,  I have discovered some great content that is being generated on the service and have started to follow some very interesting users on there and see a great community forming. I will definitely continue to play with and watch the service evolve.

44 thoughts on “My Thoughts on Posterous as a Lifestreaming Platform”