I was surprised when I looked at the online schedule of day 2 of the 140Conf because I saw a talk on there for MySpace on “The Future of the Lifestream”. I hadn’t seen it before so my guess is that it was a last minute add on. I was impressed as this was now the second talk at 140Conf on Lifestreaming (The panel I was on presented the previous day). 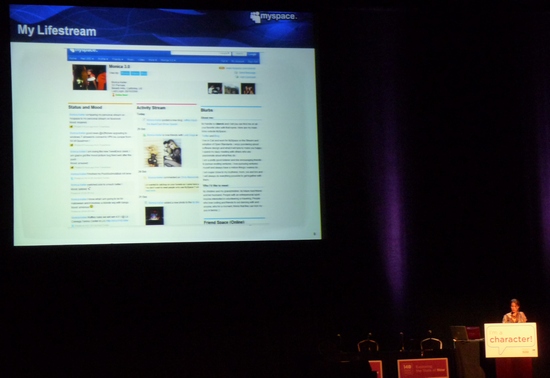 To cut right to the chase, Monica Keller of MySpace was showing their Activity Streams implementation. Activity Streams is an extension to the Atom format that was designed to store the format and information that could be used for a Lifestream. I was probably the most excited person in the Kodak Theater for this talk. I have been following the Activity Streams initiative since its inception and had heard about MySpace adopting it but this was the first time I got to see the goods and get full details behind it.

Here’s a short clip I recorded from Monica’s talk

Mike Jones who is now the COO of MySpace spoke prior to Monica and he spent quite a bit of time emphasizing the importance of the (Life)Stream. He even stated that “The stream is the flowing blood of a social network”. So it seems like MySpace gets it. They understand that providing a central presence for an open platform that facilitates the sharing of content created outside of their service is crucial to their success.

I was able to speak to Monica for a little while after her talk and discussed some more specifics about what they’re working on. I believe she told me that they expect to roll out Lifestreaming to all users this year, but I haven’t been able to get her to confirm this via email prior to this post.

Now I think everyone sees the elephant in the room and knows that MySpace has quite an uphill battle to regain all the users that its been hemorrhaging to Facebook but their Lifestreaming implementation may be able to help them retain and possibly get some users back depending on how well it’s implemented. Facebook’s implementation for allowing you to import services is limited, fairly hidden and not very good.

I really am looking forward to watching MySpace push this envelope helping bust the dam of data that is necessary to get all social networks to compete on the same playing field. I for one am definitely paying attention to MySpace now and will watch how this plays out over the next few months.