I went ahead and started creating my account as I have on so many services before it but quickly started getting a very familiar feeling with the interface. You see I am very familiar with the Drupal CMS as part of my day job for the X PRIZE Foundation and I saw some very familiar telltale signs of the CMS within their user interface. Just to make sure though, I pulled out some of my ninja skills (ok, I just tested a few /node/* urls in the site path) and I was able to deduce that this surely was a site built on Drupal. I’m also pretty sure that they are using the Activity Stream module which you may remember I mentioned a while back that was sponsored by Chris Pirillo 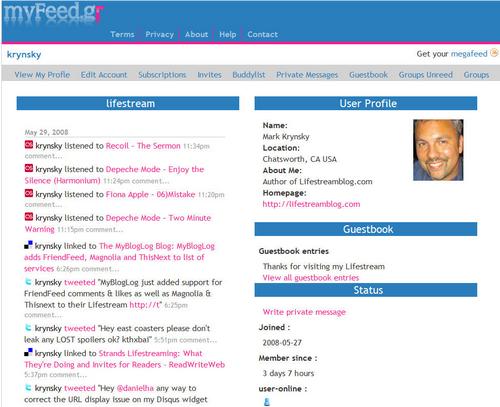 The site appears to be using a large amount of the core Drupal codebase but these guys have definitely put a good deal of effort into some customizations. Overall I’m pretty impressed with what they have been able to accomplish with Drupal. The flexibility of the platform never ceases to amaze me.

myFeed.gr offers support for 35 services already with the ability to add your own feeds. They also have support for placing users in groups, exporting your Lifestream in an RSS feed, and widget support.

While the site is pretty functional there are still some rough edges that need to be smoothed out. I came across some errors, some of the navigation can be cumbersome, and there is no simple way toÂ  find other users on the site. So it’s not really yet ready for prime time,Â  but I have to applaud their effort and they are a definitely a service to keep your eye on.