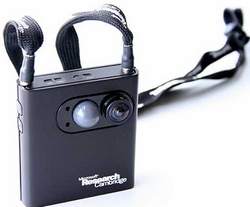 Today I came across this post where the writer had just watched the great documentary by Banksy called Exit Through the Gift Shop. If you haven’t seen it I highly recommend it and is currently available as a streaming movie on Netflix. John came to a similar correlation as did I about one of the film’s main characters, Thierry Guetta, who had a compulsion to try and record as much of his life in video. It struck him to a similar project created by Lifelogging pioneer Gordon Bell in which he wore a custom camera around his neck to try and record large portions of his life.

John goes on to discuss an idea he has for a device that could record video using an iPhone or Anrdoid and upload the data to Amazon S3 storage in realtime. What John doesn’t realize (I’ll have to let him know) is that there are solutions coming. First off there’s already a device that was inspired by Gordon Bell has been created called the Vicon Revue and can be purchased today. The problem with this device is that it’s quite pricey at around $750 and would require you to carry yet another gadget around. You can learn more about it from this review that an Engadget editor wrote last year after using one at E3. 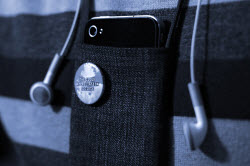 Another option though that is closer to what John was theorizing is something I came across a while back dubbed “The Lifelapse Experiment“.  This is a product that is still being developed and not many details are available as to how exactly it will work. The premise is that they’ve created a special pouch that you can place your iPhone into which exposes your camera and then you wear it around your neck. There aren’t any details on the app that is presumably used to both capture and store the data and all you can do on the site currently is sign up for the beta. They also have a button to purchase it which isn’t activated yet. This would apparently do much better if they launched it as a Kickstarter project.

One other option available is the Loooxcie camera as well. This is a small camera that you wear over the ear like a Bluetooth headset. It has the ability to record directly onto itself or be integrated with either an Android or iPhone for added functionality and storage.

So there are some options to capture some Lifelogging video out there and surely both the devices and apps to fuel them will continue to evolve nicely.