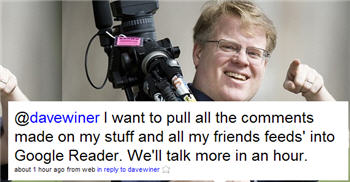 So I decided to check and see if the current format used to get RSS Feeds for all user data would also work to specifically get Comments & Likes for users. As you can see below, it sure enough did. Looks like I found another un-documented feature.

Here’s an RSS feed for my comments:
http://friendfeed.com/krynsky/comments?format=atom

Here’s a feed for my Likes:
http://friendfeed.com/krynsky/likes?format=atom

Lastly there is a combined feed to track both of those feeds as well:
http://friendfeed.com/scobleizer/discussion?format=atom

Sure it’s an ugly hack, but until they offer what Dave asked for or release an API it’s still a workaround if you want to do this.

Time to break out my favorite http sniffer Fiddler and see if there is a way to get an RSS feed of all users commenting on a specific users data which is what Scoble wanted. Perhaps someone else will figure this out.

Just doing my job to make Scoble happy. Because wouldn’t that just make the world a better place?