I was IM’d this morning by reader Olivier (the developer behind Life2front) telling me of a link I should take a look at. So I head on over to the news story at Six Apart announcing their new Action Streams plugin for Movable Type. I’d like to welcome Six Apart to the Lifestreming party! (golf clap). Yes, I’m being a bit sarcastic, but it’s due to some attitude conveyed in the post.

I’ll start off by saying I’m more than happy that another high profile company has joined the Lifestreaming fray. But as I began, and continued to read this post, it read as if Six Apart was gleaming inÂ its own innovation.

Today we’re excited to share an amazing new plugin for Movable Type that allows you to aggregate, control, and share your actions around the web and we’re the first to bring this sort of functionality to free and open source blogging tools

(waving index finger in air with head gyrating) Oh no you didnt!

That’s a pretty ballsy statement, and well… totally innacurate. I wrote about the very first plugin (created in November of 2006) offering this functionality for open source blogging platform WordPress. Since then there have been quite a few others.

Let’s get back to the story shall we?

but if you’re using one of today’s hosted services to share your actions it’s quite possible that you’re giving up either control over your privacy, management of your identity or profile, or support for open standards. With the Action Streams plugin you keep control over the record of your actions on the web.

While not as blatant as the previous blurb, this is still a bit misleading. I’ve also written about privacy a few times and always find it interesting when mentioned regarding Lifestreaming. All of this information is available publicly on the source sites you are aggregating into your Lifestream anyways. You are simply making it very easy for yourself or someone else to view the information.

While it’s nice to have privacy features built into a plugin or service, ultimately that functionality should be happening on the source site itself. So on Del.icio.us I have a “Do not share” checkbox, and on services like Youtube and Flickr, I can make the content I upload private. That is truly the best way of controlling content barring not leaving your hard drive in the first place. Either way, FriendFeed & iStalkr allows you to mark a source in your Lifestream as private, and both FriendFeed and Jaiku offer the ability to delete individual items in your Lifestream.

There’s some more self patting on the back in the post, and I’m sure much of it well deserved. Anyways, that’s the end of my little rant. Truth be told, I haven’t looked under the hood of this plugin yet, and I look forward to checking it out. I also do like the fact that it’s taking advantage of Microformats and pushing towards a decentralized solution. It’s also great to see that they’re focused on supporting many of the emerging open standards including Dataportability.

Below you can see a screenshot of the plugin in action. Visit David’s site here 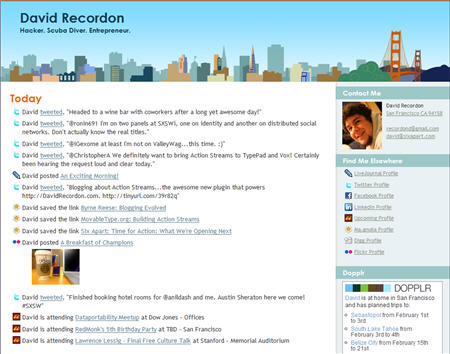