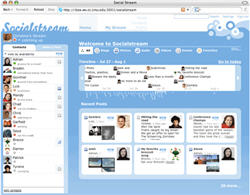 User Tommaso on #Lifestream let me know about an interesting project called Socialstream. It was the result of a Google-sponsored capstone project in the Master’s program at Carnegie Mellon University’s Human-Computer Interaction Institute. It was initially planned as a way to improve Orkut which is Google’s home grown social network but it went beyond just simple funtionality changes and UI improvements.

Here’s a snip of the Lifestream task they were trying to accomplish:

Aggregated Social Content – Presenting all of a person’s social content in a single site makes it easier for users to keep up-to-date with their contacts by making the process of finding information takes less effort and time. With Socialstream, users no longer have to jump from site to site just to see if or what their contacts have been up to, since all information is easily accessible from a single location.

After reading through the project pages this looks to be a very well thought out and impressive looking service. It appears to really be striving to not only allow users to create Lifestreams, but adds functionality to create a social network based on them for all users within to share their presence with each other. Im really looking forward to this one and hope that it becomes available to us at some point soon.

This project illuminated my realization that one thing I’m starting to notice. As we get flooded with more Lifestreaming services there is a need for one of them to gain dominance if a social network is to be built around them. For many of us, not only do we want a full featured Lifestream with all our aggregated services, but we want all our friends’ Lifestreams to be just as easily accessible on that same service. The same issues that prompted the Lifestream concept to be created in the first place, will repeat if such a service doesn’t emerge.

A similar situation is starting to happen with the battle for micro-blogging services. Twitter, Jaiku and Pownce are now in a duel to see who will become king. Having a winner is pretty important as following your friends and posting to all 3 services is cumbersome. Although similar, for me, the use of any one of these is just a service component that make up my Lifestream definition. If you follow my Lifestream, it doesn’t matter which one of them I use and vice versa if I monitor your Lifestream. For now, I primarily use Twitter and feed that content into Jaiku. That’s the beauty of Lifestreams, you can choose any services within specific areas to make one up.