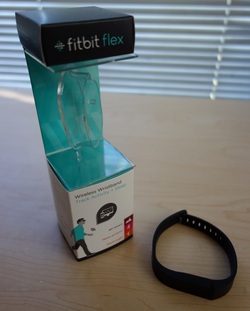 Its now been a few months since I did my activity tracker review testing four devices simultaneously. I determined that the Fitbit One was the best tracker for me* although I also did like the Jawbone Up quite a bit. I have since switched from the Fitbit One to the Flex and now use that tracker exclusively.

Most of the reasons I chose to switch from the One to the Flex were functional. It became a bit tedious for me to have to remember to move the One after every wardrobe change and I wasn’t a fan of having to remove the device from the belt clip to the wristband at night either. With the Flex both of those issues are now gone and I can even wear it in the shower. I also feel that the Flex has been the most comfortable of all the wrist based trackers I tested feeling much more comfortable than the Fuelband and a little nicer than the Up. The watch clasp fine tuning is definitely a contributor to that along with the material and weight of the device.

One issue I have with the sleep tracking is that I sometimes forget to turn it on at night or in the morning but I have found that I can manually log my sleep correctly in those situations by going into the old dashboard interface. I haven’t figured out a way you can access that feature in the new one. I wish the Flex had the ability to sense when you wake up automatically the way the Jawbone Up can. Also a missing feature I’d like to see is native support in IFTTT for the Fitbit which the Up has.

I don’t miss the lack of the altimeter sensor as I didn’t use that on the one. I track my hikes in Runkeeper and I didn’t personally get any value from tracking that data. Other than that I don’t have much else to report at this time. Other trackers that I’d like to test in the near future are the Withings Pulse, the Basis, and the Misfit Shine.

* I often get asked what is the best activity tracker and after testing 4 simultaneously I can tell you that there is no simple answer to that question. Everyone will have different needs that will be better suited by a particular device. I tried to provide that informational breakdown in my review.