Today AOL owned Bebo social networking service released their initial implementation of Lifestreaming features to the service. This functionality was brought in after AOL’s purchase of Lifestreaming service SocialThing and I’m sure also based on features created for their buddyupdates service. Several sites have covered the news portion of the annoncement (links below) but I’m here to provide you with details of what’s actually under the hood. Since I wasn’t a Bebo user, I thought I’d provide a first hand look at these new features for you.

Upon visiting the site I went to create a new account and filled in all the standard information needed. After that I headed straight to the new Lifestreaming functionality. The steps to create your Lifestream and view it aren’t totally intuitive and took a minute to find from the profile page so I’ve added the screenshot below with steps to take to help you create one. 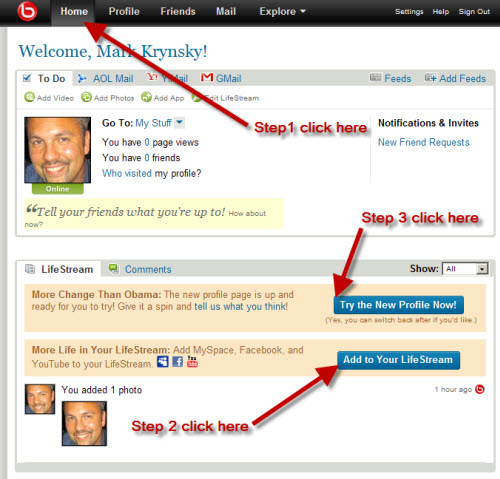 The initial set of services supported is limited to Twitter, Flickr, Delicious, YouTube, and competing networks Facebook and MySpace. The Facebook integration simply brings over your status messages and photos. I added it for testing, but since I sync my Twitter status to Facebook and primarily use Flickr for photos I later removed it. Even after removing though, the items imported remained with no way to delete them. The MySpace integration only brings over blog posts.

The Lifestory feature is supposed to be a timeline based Lifestream similar to the current crop of services like dipity, Allofme, thismoment & Lifeblob. It’s design and function is nice, but the problem is that it’s limited to actions on the Bebo network and doesn’t incorporate your data from the services you import. You can manually add an item with photo and link along with a date to your Lifestory, but this is rudamentary compared to other services in this space. I think they should have waited for Lifestreaming support before releasing as the current version is lacking.

By default your profile (and Lifestream) will be private. You need to make your profile public which will then provide a url based on your username which you can then share. First off I didn’t like the automated username of MarkK316 which Bebo automatically assigned to me. To change it I navigated to the Settings->My Account and under Account Details I clicked on Change Username. After that you go to Settings->Privacy and change the radio button under Profile viewable by my friends only to everyone. Then go back to your profile page and you will see the URL of your profile listed under your profile picture. Mine is bebo.com/Krynsky

We knew Bebo was working on adding a richer Lifestream experience and while they have taken a different approach by making it prominent as opposed to Facebook who buries theirs, the experience appears to be cobbled together by various different teams which makes for a disjointed experience. Also, the current support of services and features is a little weak. Hopefully they will add more services and gradually refine the functionality because it’s currently a little light and not compelling enough for users to switch. Only time will tell.