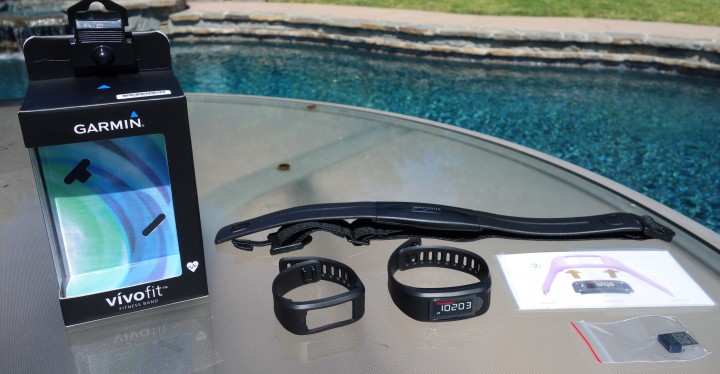 Back in March I decided to put my activity tracking on hiatus and sold my Fitbit Flex as I prepared to have shoulder surgery. Then after a few weeks during recovery I began reading reviews of the newly released Garmin Vivofit activity tracker. The first of those reviews was on my favorite product review site The Wirecutter in which they chose it as “The Best Fitness Tracker” replacing the previous choice which was a Fitbit. I consider the The Wirecutter roundup reviews to be the gold standard because they choose top gear in various categories after thorough reviews of their own and along with those of others. I have purchased many items they’ve recommended. So when they replaced the Fitbit with the Garmin I took notice. I then read several other in-depth reviews which also praised it and decided I would jump back on the activity tracker horse again to test it out myself.

I’m not writing an in-depth review. I’m simply going to provide some of distinctions about this Garmin Vivofit activity tracker which make it different and in many cases better than the previous trackers I tested which included the Nike Fuelband, Jawbone Up, Bodymedia Fit, Fitbit One and Fitbit Flex. This write-up is geared more for people that are already familiar with and using an existing tracker to understand how the Vivofit differs. I will be brief and will link to other more complete reviews at the end. So with that let’s begin.

The Garmin Vivofit band sells for $129 which puts it in similar company to the other trackers I tested give or take $30. However it offers an optional bundle for an extra $40 that comes with a heart rate monitor that can sync and communicate with the Vivofit to provide a real-time reading when worn around the chest. This is a nice added feature that only a few activity trackers offer like the Bodymedia Fit and Basis Health Tracker. It’s nice that it’s optional so that you only need to use it when needed and doesn’t add any additional bulk to the wristband.

The Vivofit wristband uses a similar method for clasping as the Fitbit Flex but works much better. It’s easier to put on and take off. You also have the choice of several colors you can buy separately as well. The face is a little thicker than other bands to accommodate the display but it’s pretty comfortable.

The display is an always on display which is really nice since I’m using this as a watch whenever I’m not cycling through to see my stats by using a small button next to it. Visually it works very well in bright conditions but due to the lack of a backlight many have complained about the lack of viewing in the dark. I too was bothered by this at times but it’s not such a negative to make it a dealbreaker for me.

So this is the area that made this activity tracker stand out from any of the previous ones I have used to make me take notice. One of the biggest differences between this tracker and others is the fact that it doesn’t need to be charged. Every other tracker I’ve used needs to be charged at least once a week. The Vivofit uses watch batteries that last a full year before they need to be replaced. The other major difference is that this tracker is fully waterproof and can go down up to 50 meters. None of the previous trackers I’ve used were waterproof. The optional heart rate monitor was also a great addition. I can simply use the chest strap when needed to monitor myself but then can remove it the rest of the time. The Vivofit also has one of the best features I liked about the Jawbone Up which is the inactivity timer. The Vivofit works slightly differently by displaying a red bar along the display when you haven’t moved for an hour. It then continues adding to that bar in segments every 15 minutes of additional inactivity. This is a great way to monitor when you need to get up and walk around if you work at a desk all day. I chose to not utilize the sleep tracking feature but you can learn more about that in the extended reviews I link to below.

Cycling through the display you can lock it on any individual screen which includes the time / date, steps, remaining steps towards goal, distance, and calories. The goal value is interesting in that it’s dynamic and changes daily based on your previous activity. I didn’t find it especially useful but it is different than the others. Syncing is wireless but initiated by holding the button on the device either near a computer that has the USB dongle attached or next to your mobile phone while running the app. It works simple and well. I do miss how the Fitbit would sync passively in the background as long was you were within proximity of the dongle but it’s not a major issue to initiate manually.

Here’s an area that I found to be lacking compared to my other devices. When I first got the device the website stats and reporting used a clunky interface and showed basic information without many frills. The good news is that stats and reporting is something that can be improved upon fairly easily and I’m happy to report that since I first began using the service they’ve gone through a pretty large revamp with many improvements and the reporting is now on par with other devices and has a similar look and feel to Fitbit’s. They offer limited exporting of data. For instance you can export step summaries by day or month.

On the API side things are limited. I did hear from TicTrac that they will support the Vivofit and Syncmetrics currently does as well. But I also heard a complaint from another service stating that they are charging a hefty fee to access the API which unfortunately will limit how many services support it without a doubt. We’ll have to wait and see how adoption of the API goes over the next few months. 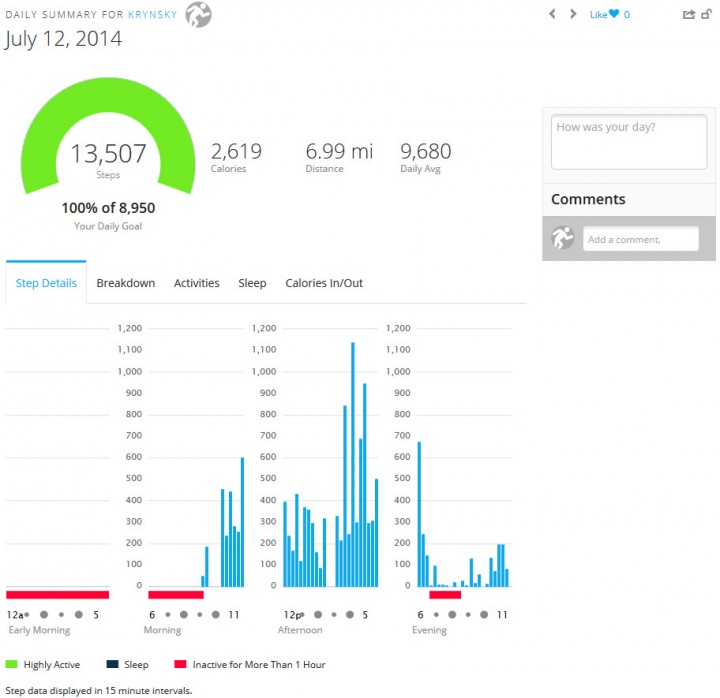 Overall I’ve been pretty happy with the Vivofit. The display is nice and having a full-time watch display really adds value. The lack of having to charge it and being fully waterproof are big advantages that make it stand out from the competition. Along with that, the optional heart rate monitor is another big plus that only a few activity trackers like the Bodymdia and Basis offer. If they continue to improve the reporting and get more third party services support via their API it will really make a difference. If you want to get a more detailed review of the Garmin Vivofit, read one of the great reviews below.