FriendFeed has been doing a great job off listening to their community and adding many great new features at a ferocious pace considering their relatively small development staff. Realzing that they have a large number of international users they just launched several language interfaces to help accomodate them. That’s great, but I still long for some additional localization features and wanted to point out some ways that I’ve found to add them even though not yet available on the service.

A few weeks ago I got the idea to create a Google shared map and invited users to add their locations to the map. I was really happy to see so many people participate and show us where they’re from. At one point we had users in all continents except Antarctica but with the help of Micah Wittman we were even able to find a user located there! 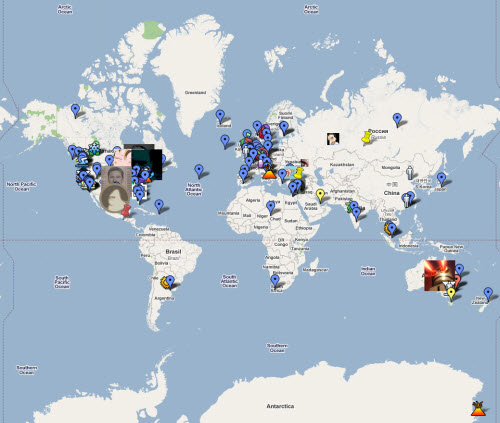 I came across this great Greasemonkey script from Hao Chen that allows you to display Twitter profile information when visiting user profiles on FriendFeed. So if a user has entered their location on their Twitter profile, it will appear on their FriendFeed page with this script. It’s also a great way to get added information on a user for now until FriendFeed adds profiles. 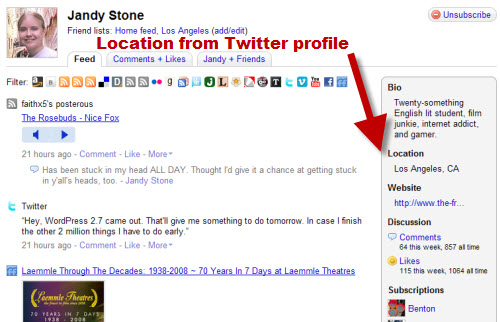 There are also many other useful Greasemonkey scripts that have been created for FriendFeed as well.

Another way to find and interact with local users is to create a room for a given geographic location and then promote and invite others to join it. I was so happy to see that Andy Sternberg had created a room for us LA users. I think it’s another great way to find users in your area.

So, you still can’t find the information you need or get people to participate using these methods? No problem. Just go ahead and create your own list and add users as you determine where they reside. I’ve created a list for users in Los Angeles just for this purpose. You can even further take advantage by creating imaginary friends and adding your local non-FriendFeed users to that list as well.

So why do all this?

Well, personally I think it’s great to develop relationships in the virtual world but there are instances where it would be nice to take those to the real world and for me that’s the case with many FriendFeed users.

Last week there was a meetup here in Los Angeles that I couldn’t attend but it was great watching several of my local friends (Anika, Monique, Derrick, and others) on FiendFeed having a great time. I’m hoping to attend another meetup in the near future and I’ve heard rumblings of several other such plans from other users on FriendFeed as well.

In the spirit of this I’ve created a new room on FriendFeed called Meetups. I’m currently piping in feeds from Upcoming.org tagged Tweetup and FriendFeed to get the ball rolling. This should be a fun place to monitor events from the FriendFeed community.

So until FriendFeed add profiles and some other localization features, I hope these tips help you make the most of your local friends. Even if you happen to find out Mark Wilson is a close neighbor 🙂

5 thoughts on “Tips for Localizing Users on FriendFeed”