This week I came across this video interview with Quantified Self co-founders Kevin Kelly and Gary Wolf that was conducted by Thomas Goetz at the Wired Living by Numbers conference last year in New York. 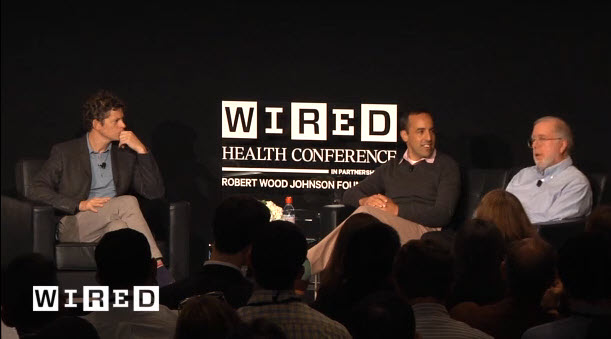 The interview begins with them explaining the origin of QS which was born in 2007 with each of them coming at it with their own perspectives. Kevin has a blog called cool tools where he writes about stuff that betters your life and met a doctor that was conducting an experiment to only eat organic food for a year. He asked the doctor if there were any tools for him to test his own blood and they were lamenting the fact that there weren’t. So he came to the realization that it would be great to start something were people could share the tools they used to track their own bodies and health because there wasn’t a single repository of that information on the web. Gary’s take was to apply his past experience on how he approached writing for Wired by thinking about the culture and participation around how we used technology to determine what are the questions we should be asking about personal tracking to determine what it should it be called. He states that by naming something you need to determine why it matters. This concept was about the language of computing and the counting (quantification) but it’s also about bringing that all the way in so close that it’s almost indistinguishable from your own (self). This is how the naming of this concept came to be.

So they began by creating a blog to cover some of what they were discovering but decided they wanted to try something more personal and posted an announcement at Meetup where about 30 people came to Kevin’s house to talk about QS.  This ended up becoming the most amazing moment for Gary because he realized that it was much more interesting to see a person do a show and tell about how they were measuring themselves to gain insight from the human side of how people are using tools. They were able to catch the new emerging culture of how we were applying technology to ourselves in the wild by having people share their stories. To manage the meetups efficiently and gain the most from them Gary came up with 3 principles for people that attended as a guide. Each speaker at a meetup is to focus their talk on these principles which include (1) what did you do? (2) how did you do it? and (3) what did you learn? With these principles in mind the meetups are very effective at providing insights for people to share.  Since 2007 these meetups have grown to about 70 groups across 15 countries which has been a pretty amazing growth.

I’ve been able to attend a few meetups and can tell you that they are amazing ways to learn about how people are finding unique methods to track ways to help improve their lives. It’s really the culture and community that QS has fostered which makes it an amazing group to be a part of. To get an idea of what you can expect from a meetup you can read my recap of the last meetup we had in Los Angeles and you can see a full listing of meetups and should be able to find one near you.

Wired’s Gary Wolf & Kevin Kelly Talk the Quantified Self from WIRED on FORA.tv