Last night Robert Scoble said that he wished he had created a room on FriendFeed so he could aggregate various data sources for the US Airways crash yesterday. Robert also wrote details about how the story broke on the real-time web today. I was also notified that a user created such an activity stream. The result is a remarkably nice visual account of the events by Kevin Sablan using the premier feature of the Storytlr service. 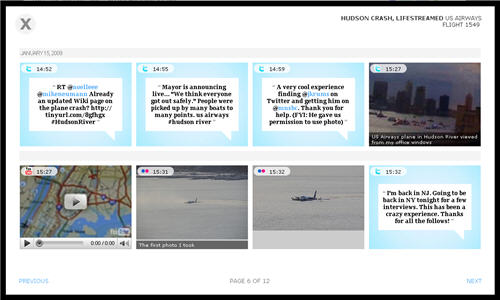 To make the presentation, I used Twitter Search to find comments with the word “Hudson” from people within 50 miles of New York City. I waded through those comments to find a handful of people whose comments, pictures and video might work to tell a story. I imported the content from each of the sources into storytlr by simply providing their usernames. The hard part was editing, or what Tim Windsor calls curating,  the approximately 700 bits of information into some semblance of a disjointed story.

You can read the full details about the process on the post here. There is also a post on the Storytlr blog here.

The idea of creating an activity stream around an event isn’t totally new. Several people have already been doing this using rooms on FriendFeed. Sarah Perez recently created the CES 2009 room where she provided coverage of keynotes and breaking news as it happened. I also wrote about the creation of one for the Ubuntu developer summit as well. Having a real-time dynamic activity stream for a live event is one of the best applications I have seen to date. I think we are going to see this become pretty commonplace this year as the value for creating one is huge.