We Need an Open and Federated Social Network. Even Facebook’s Paul Buchheit Said So. 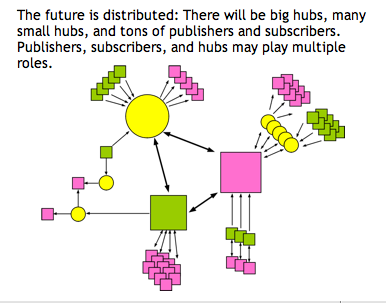 I’ve been somewhat following the whole Facebook privacy debacle over the last few weeks with some interest. The very passioned outcry I’ve seen from so many is something I didn’t expect. I agree that any social network that offer layers of both public and private sharing needs to adhere to some basic principles. They need to be very clear about what information is public and make it very simple for people to adjust their privacy settings. For the most part I think sites have done a decent job of this and the reason Facebook has been criticized is because it started as a defacto private network that slowly, and in many people’s minds sneakily, opted its users to being public. You need a giant infographic nowadays to help navigate your way through the current privacy settings. I did come across this great new tool you can use to check and reclaim your privacy settings.

But this post isn’t to talk about that as I feel many have covered this topic very well. My interest really got piqued when I started to see many people get excited about a new project called Diaspora that was announced last week. This Facebook incident became the catalyst for a group to create in their words “an open source social network”. This team created a site with some basic information about their goals and asked for 10k in donations to help them get started. Word of their endeavor spread like wildfire and got a good dose of fuel when Leo Laporte deleted his Facebook account and announced giving a $100 donation to the Diaspora team. They have raised over $176k as of this writing.

It’s nice to see the attention that the Diaspora project is getting and specifically the plight of creating a decentralized and distributed open source social network. Unfortunately I don’t think that this team is the proper group to head up such an endeavor and I’m not alone with this sentiment either.

Chris Saad wrote a piece that captured my thoughts and feelings the closest. His post describes his personal experiences trying foster adoption of the DataPortability project and the roadblocks he encountered along the way to provide the real-world challenges the Diaspora team will face.

He takes the Diaspora spotlight as an opportunity to highlight what really needs to happen with this statement:

I think we need more fresh, independent voices generating hype and attention for the idea that an open alternative to Facebook can and must exist. Their success in capturing people’s imagination only shows that there is an appetite for such a thing.[Regarding Open Standards]… We all need to do our part to embed them into every project we’re working on so that peer-to-peer, interoperable social networking will become a reality.

Alex Wilhelm over at TheNextWeb took a different approach by breaking down the reasons why Diaspora is not the answer. Stating that their system will be too complex, points to why it won’t easily guarantee the privacy concerns that fueled the project, and questions whether people would be willing to pay for it. But ultimately he sees their endeavor as a positive one and wishes them the best of luck.

Lastly Jason Fried over at 37Signals took the brutally honest approach and calls their recent attention a curse. He points to the fact that they have now raised too much money, the spotlight is on them much too early, and the expectations are too high.

I agree with all 3 of these posts. I have watched Lifestreaming services progress for over 3 years now which in many ways have attempted to achieve what the Diaspora team is trying to do. I think having a system that allows us to tie together multiple web services we pick from a menu to post content in an aggregated fashion and tie in friends across these services in a seamless way is the end game.

Many talented teams have tried and failed at this with the closest team to do it being FriendFeed. I was one of the first users of FriendFeed and followed the site’s development and growth very closely. I made it a point to try and read all news written and listen to interviews with their founders.

The Facebook situation reminded me of several times that I recalled FriendFeed co-founder Paul Buchheit discussing the need for an open and federated system to take FriendFeed to the next level. I remember when I attended his panel at SXSW in 2009 where he discussed this along with folks from Microsoft and the soon to be suitor Facebook.

I was able to dig up and re-listen to this Gillmor Gang podcast I remembered featured an interview with Paul Buchheit where around 7 minutes into the podcast he says the following:

“I think in the long term if what we are building here [referring to FriendFeed] is actually as important as we believe it is, it’s going to need to be an open and federated sort of system where there is multiple participants.”

It was a few months after this podcast that Facebook came in and bought FriendFeed. It almost makes me think that not only did Facebook want to acquire the talent from FriendFeed, but also diminish any further possibility of them making progress on an open and federated social network.

So where does that leave us now? Well I still think that as much as I and many other folks like the freedom and ability to totally customize your own social network in the way Lifestreaming services allow us to, it’s just currently an impossible task to simplify it for the mainstream. As bad as it may seem to have all the features and functionality controlled by a single entity like Facebook, it’s the simplicity, integration, and elegance that captures the mainstream and I’m sad to say it’s going to be a long time if ever before an open standards federated platform can be built in a meaningful way to compete with that.

That’s not to say that we shouldn’t continue working towards this goal and I’ll be the first to be a cheerleader for those working on this endeavor. In fact ever since the Diaspora team has been gaining notoriety, I’ve been trying to swing the attention to the similarly focused OneSocialWeb project which I think is much more deserving of the spotlight. It was created by the proven development team of the very popular Storytlr Lifestreaming service which they released as open source to turn their attention to this project. You can read my post with information about their project to learn more.