I was at BlogWorld Expo sitting next to Louis Gray at a panel when news came out that Twitter lists had been launched. Louis went to his Twitter page and sure enough he saw the feature and started playing with it. I on the other hand did not see the feature when I went to my page. Because we saw the news on Twitter we didn’t realize it was a small limited rollout of the feature to a select few.

As Louis continued to test the feature we noticed the url path to get to find out what lists a given user is on which is http://twitter.com/<username>/lists/memberships. But you only will get the results if your Twitter account is list enabled, otherwise all you get is a blank screen.

So I asked Louis if he could pull up my name to see if I was on any lists and he obliged and then sent me the screenshot you see below. 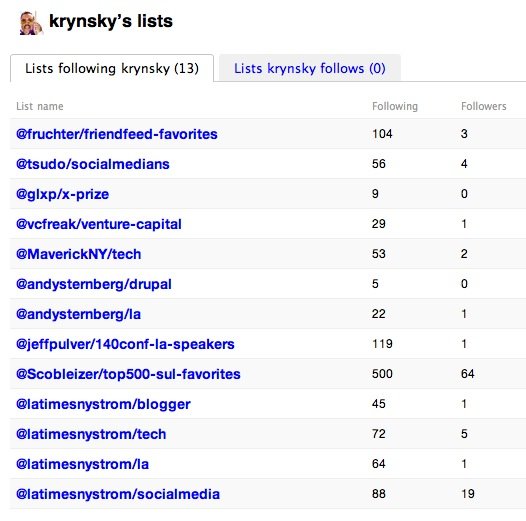 From the image you can glean quite a bit of information and start to see the value that this will bring to Twitter and its users. From the image I can see the users that have put me on lists along with the names they gave them and how many other people follow the list. I can imagine someone coming out with a tag cloud for users based on the keywords used in the lists they appear on. Or perhaps instead of users who are self serving when they add themselves to WeFollow (present company included) someone will create a version that is based on what others have deemed you. That follower number is also interesting as it can act as an authority value coupled with the users who are adding them. As you can see there are some great possibilities here. Conversely it will make for an interesting search to see who’s landed on the most douchebag lists 🙂

Yesterday at the Web 2.0 Summit Twitter CEO Evan Williams stated that he hates the much criticized Twitter suggested user list and can’t wait for this new feature to be relased. I too am very excited about the possibilities offered by having this functionality built-in directly into the service and accessible by the API. I’m sure we’re going to see some more interesting services that will utilize this data to create authority and trusted users lists that can then be used for all sorts of interesting things.

I can’t wait to be able to say goodbye to all the 3rd party kludgy external lists/groups features. I’m currently maintaining groups in Tweetdeck as well as a separate lists in the iPhone Simplytweet app. It will be a race to see which desktop and mobile apps release a lists capable versions. I can easily see myself jumping ship to another app that offers support first. I’m so excited and wait very anxiously for this to be released.