Quite a bit has happened in the world of social magazine apps and services since my roundup earlier in March. We have seen many of the existing players evolve and several new ones enter the game all whilst the market continues to grow rapidly. Flipboard, came out of the gate last year with not only one of the most beautiful content visualizations but also the ability to import social content. They were the first to strike a nerve along these lines and have never looked back. Flipboard is a great app and one of my favorites. It also continues to have the largest mindshare in this area even though there are several facets to what can characterize a social magazine app. 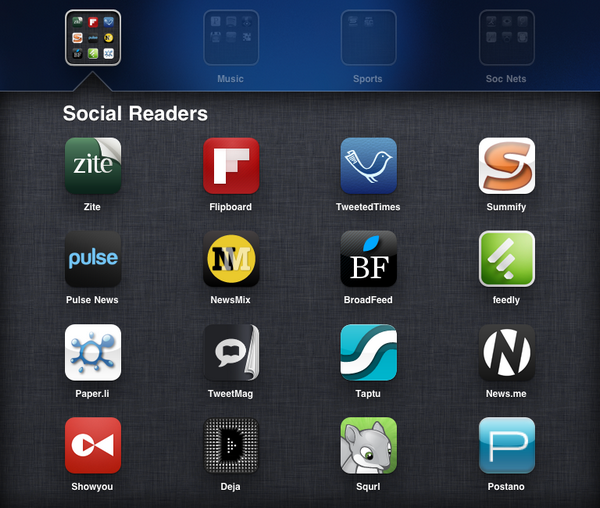 A social magazine app is defined by providing the ability to connect and import content shared from your social networks. After that initial connection, there are three different approaches. Some focus on creating a rich visual experience from the content they import, others provide logic to filter the top news based on what’s shared by your social graph, yet others focus on learning your interests to serve up the most relevant news. Some will try to do a combination of two of these, with varying filters and functionality, but just like the project triangle they can only choose two.

There has been a slew of apps that have launched to try and strike a similar magic to Flipboard. News.me got a lot of attention earlier in the year as a contender coming from the team that brought us bit.ly but probably didn’t get much traction due to trying a subscription model unlike any other app I’ve seen in this space. They recently decided to drop that monetization logic and branch out as a separate entity. I’ve been playing with this app recently and compared to Flipboard, they’ve filtered the content delivery mechanism somewhat. Flipboard simply displays all content unfiltered in reverse chronological order shared from my connected accounts at the time I refresh the app. News.me on the other hand appears to apply a filter that only displays links to web pages from select people I follow still being done in reverse chronological order from when I refresh the app. So if you’re interested in reading shared pages from those you follow while hiding status updates, photos, and other non-related content, News.me will help you past that noise.

While News.me does filter the noise, I still don’t know how it’s determining what content to show me and it’s still a limited approach by only covering items from the last few hours. To get a full digest of the most popular news shared by your social graph over the course of a full day you need to look at other apps such as Tweeted Times or Summify. I’m a big fan of these as they prioritize the news based on the number of people that shared it and they show me who those people were. In the case of Tweeted Times I can even create separate digests based on my Twitter lists which is good if you want your news in separate categories. While Summify doesn’t offer list creation, they go beyond Tweeted Times by including data from Google and Facebook in addition to Twitter. I originally felt this these would lead the pack for apps that I’d be most interested in but I can honestly say that Zite has really surprised me by offering up great content I wouldn’t have normally found in these apps.

Another feature I really like is segregating by media type. This means to take all the shared content from my social graph across multiple networks and put photos and videos into their own sections. Newsmix, Paper.li and Knowabout.it provide this feature. Newsmix is the only one of the three that has an iPad app though. Since I last covered Newsmix they’ve also added a website and yesterday announced a Facebook app to access the service. They are the first to offer this triple play. Something to note is there’s been a new market created for several apps that now only focus on video including Squrl, Showyou and Deja.

I initially learned of an interesting newcomer that originally launched as Postpost importing only your Facebook content but then was bought by Postano and quickly pivoted to be much more by aggregating across multiple sources including Twitter, YouTube, Tumblr, Blogger and RSS feeds and also positioned itself as a way for brands to embed their social activity on their own sites. They still offer functionality for regular users and you can see my page here. You’ll notice that they also offer the ability to segregate content by media type as well. You can learn more about their service here and a demo video here.

If you thought the social magazine app scene was pretty heated up already, it’s about to get invaded by Google with an upcoming entrant called Propeller. It should be interesting to see what they have to offer to a pretty tough market to penetrate. It will be interesting to see what services they support and I suspect part of the motivation for this is to provide a way for people to consume Google+ content which currently isn’t available for any other apps due to the lack of an API being available. Even though I did come up with a hack to read Google+ content on Flipboard.

As a final thought you can see things are a bit complicated and still evolving in the social magazine space and I believe will continue to be for quite some time. I’m just glad to see that this area is really taking off. Below I’ve embedded an updated version of my original comparison matrix (direct link). If you know of any apps or services that fall into the social magazine space that I don’t have listed, let me know in the comments.