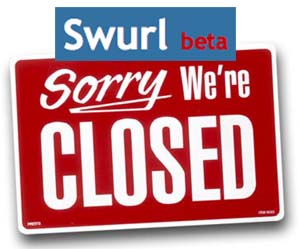 I found out yesterday that Swurl.com has shut down. Swurl isn’t the first Lifestreaming service to go the way of go dark. They join several others which I update on my Lifestreaming services listing page. But in this case it was a little surprising considering that the service received quite a bit of fanfare when they launched just 8 months ago. They received coverage from many major sites including ReadWriteWeb, TechCrunch, Webware, Lifehacker, and Somewhat Frank.  My review of the service is here.

If you visit the site now you get a message that basically states the creators just don’t have time to maintain the site anymore. This is understandable but they could have done a better job warning users. An email several weeks before shutting down,  giving active users lead time prior to the closure would have been nice. This would have been a thoughtful gesture since at the end of the announcement they promote two other sites of theirs.

The closure brings up a few things to keep in mind when choosing a Lifestreaming or any other web service for that matter. Besides the bummer of losing a service you chose to be your Lifestraming home, there can be many other issues to be concerned with that will require refactoring in this web world of intertwined services and mashups.

From a Lifestreaming perspective you are probably for the most part importing your content from other services but there are still some areas where you may have content you want that was created natively on the service. Posts made directly, comments, bookmarked items,  friendship / follower data and more. If no warning is given, and no options to export information are available, you appear to pretty much be SOL.

This is probably one of the biggest arguments and reasons why we need Data Portability. I won’t get into those details (as I’ve covered it before) but it’s an important concept that will hopefully become adopted in some form soon.

So beyond the loss of content, Lifestreaming services also can be a bit more complicated than other sites because we may have a workflow that is fully dependent on them. For instance I sync my Twitter status to Facebook and I publish my FriendFeed posts to Twitter. Those are just two examples but nowadays many people have some pretty complicated workflows where they use a source service to move or sync data amongst various other services (fodder for another post I need to write). So with the loss of a Lifestreaming service you may need to remap your workflow.

Lastly, if you are using either embeddable widgets or scripts that pull data via API to your own blog. Those will now not function. For that matter any other 3rd party tools such as browser addons, third party sites or apps that worked with the service will also come to a screeching halt. Can you imagine if Twitter shut down? There is a whole cottage industry that has formed on the back of them that would suddenly disappear.

Anyways, I just wanted to provide some important things for you to think about along this topic.  As Chris Jobling thoughtfully pointed out regarding the shutdown, “don’t get too attached to a single Web 2.0 service! In the current economic climate, there’ll be a few that fall by the wayside”. Wise words to live by as I unfortunately think he’s right.

UPDATE: Two more Lifestreaming services are struggling. I guess it’s a sign of the times.

11 thoughts on “Choose your Lifestreaming Service Carefully. Swurl.com is No More”