Last Friday was the first Dataportability meetup to take place in Los Angeles at the super cool new co-working location Blank Spaces. For those of you not familiar with the Dataportability movement here is the mission in their own words:

“To put all existing technologies and initiatives in context to create a reference design for end-to-end Data Portability. To promote that design to the developer, vendor and end-user community.”

The two principles heading up the discussion were Chris Saad & Ben Metcalfe. It began with everyone providing some details about who they were and why they were interested in Dataportability and what they wanted to get out of the discussion. After that it was pretty much an open forum to ask questions and discuss the movement in more detail.

One early question, and Chris confirmed this is one of the most common, is why would a vendor want to support Dataportability. It’s a very valid question, and one that can be a bit tricky to make a convincing case for. It’s basically a chicken / egg situation. I don’t believe a vendor will necessarily want to invest time and money opening and extending their architecture to accommodate Dataportability until their users and or outside pressure requires them to. Especially considering that most social service sites have an interest in protecting the content their users generate as it’s the valued asset they monetize through advertising and marketing. They may not necessarily want to see that data be free to live and or move to another service.

So based on that I feel an initial alternative route to take may be to make the case to end users. This can be a bit challenging as well because the case needs to be made in a very simple fashion. I feel that creating a hypothetical use case that is compelling to users and easy to grasp would be helpful. I’d love to see something along the lines of how Common Craft created the Twitter in plain english video.

What I’m proposing is they make a video targeted to the end user that is very specific in how this would work for them in the future. So let’s say hypothetically as an example that both Librarything & GoodReads (2 great services for managing your book reading) support DataPortability. Having spent countless hours adding over a hundred books to Librarything as well as reviewing, rating & tagging them, I decide I want to migrate to using the GoodReads service. The use case would provide the value in both saved time and flexibility showing the simple steps it would take to migrate the data from one Dataportability enabled service to the other.

I think overall Dataportability is an extremely important initiative based on solid existing standards. As a huge evangelist for Lifestreaming, I see the benefits pretty clearly. They’re also lucky to have some great PR going and talented technical people behind them. But it appears to me that much of the focus will need to be made on educating end users on its benefits and why they need it. This will then hopefully in turn put more pressure on vendors to adopt it.

Here’s a video from the event by TechZulu

Here’s a shot of Me and Don Mosites from Streamy.com 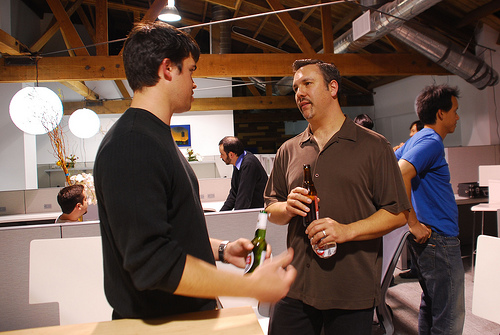 6 thoughts on “My Thoughts on First LA Dataportability Meetup”