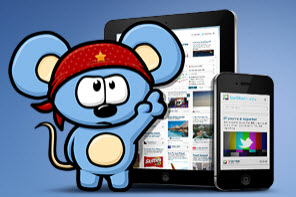 I’ve recently started testing out a new service called Rebelmouse which adds a slightly new twist to Lifestreaming. The service bills itself as “Your Social Front Page” and while it currently only offers up the ability to connect Facebook and Twitter to power your Lifestream, it does provide some unique features worth discussing.

As the title of this post suggests, they provide several features that give you the ability to customize the items that are imported from your Twitter and Facebook feeds. The customizations take on several forms. First off the service doesn’t simply provide your standard unfiltered dump of feed items in reverse chronological order. There is some logic that determines what items, and the order in which they appear on your page. Part of the logic is determined by pre-filtering the types of items that will appear automatically. For instance on your Twitter feed you can define whether or not to publish retweets. The nice thing is that items that aren’t published don’t just go into a black hole, but are put into a “drafts” area of your dashboard / settings area where you have the ability to manually publish those items to your page if you so choose to. It seems as if an item needs to have a link or asset attached as I have seen pure text Twitter updates not make it to my page but appear in the drafts area.

After you have everything setup you can visit your page (here’s mine) and will notice a very familiar looking layout. Rebelmouse continues the trend of utilizing a heavily borrowed Pinterest design to display all of your feed items. As you scroll down the page it provides an infinite page that refreshes with new content the further you go down.

Where Rebelmouse really shines is in the many manual ways to curate your page. You have the ability to manually drag, move around, and drop items to other locations on your page. This allows you to have complete control of the sort order of items as well as highlighting a single item that appears much larger than other items on the page. You can also freeze items in their current location on the page that will then not be moved or replaced as new items are imported. Another cool feature is the ability to delete an item from your page. I often use Path and Instagram and choose to selectively syndicate my content to other sites. This can unfortunately cause duplication when you aggregate data to a single service. In this case I had duplicate items I syndicated to both Facebook and Twitter from Path appearing on my Rebelmouse page and was easily able to delete those duplicates. Another unique feature is the ability to edit imported feed items where you can change the headline, description, asset (image or source url), or tags. And if you want to add an item manually outside of your Twitter and Facebook imported items, they also provide a manual method to do this with a handy bookmarklet to do it as you surf the web.  I also should mention that you can make some basic theme changes to your page with regards to typography and backgrounds. 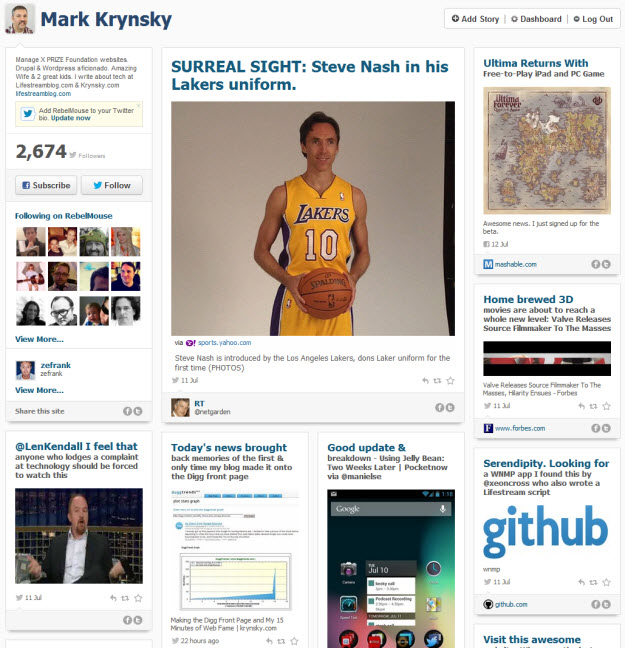 All of these editing capabilities provide a level of manipulation I have yet to see in any other Lifestreaming service, granted that it’s currently limited to just Twitter and Facebook and I’m not sure there are plans to expand to provide support to other popular services such as Instagram, Foursquare, or YouTube for example. Either way, even in its current form it makes for a very nice way to get a quick summary of what a single user is sharing.

There are several other features that are really designed to use Rebelmouse in a much more collaborative or marketing way. You can manually create a page that is composed of multiple Twitter accounts with some granular settings for each of them with regards to the feed items that get published. You can also utilize a hashtag to import content from Twitter as part of your feed as well. If your Facebook account is linked as an admin to a page you can also import those feeds to Rebelmouse. They also will soon be adding statistics showing clicks and views for individual feed items.

The last intriguing aspect of this service comes by way of this preview I read on Pandodaily which was how I found out about Rebelmouse. The story claims that the service has only implemented step one of their goal at the current time. Step two will be to make sense of all the social feeds we consume. It sounds like plans to enter the crowded social news arena which I’ve covered quite a bit here. It will be interesting to see how that pans out as it’s quite a different path from what I’ve currently seen paved.

4 thoughts on “Create a Self Curated Lifestream with Rebelmouse”