This is the first guest post from reader Terri Ann. I wrote about her custom Lifestream previously here. You can visit her blog at blog.ninedays.org and don’t forget to check out her lifestream. If you are interested in writing a guest post, just head on over to my contact page

The other day on css tricks.com, they posted about creating your own social home which appeared to me as more of a personal/social portal than a lifestream. A lifeportal, if you will.

Chris, over there, provided a great download to get you started building your own lifeportal using only jQuery and JSON to query the API’s for three popular web services: Flickr, Twitter and ScrnShots.

His article also walks you through everything those scripts are doing, giving you the tools to really customize the download to suit your own needs.
It’s those customization skills that are so critical with lifestreams and lifeportals since everyone uses their own set of social networking, social bookmarking and other social sharing services.

The way I see it, the main difference between lifeportals and most lifestreams is that this idea or a portal page is based more on the service and the latest information from that service than the date. How else can I put it? Like a page of feeds about the now, more than the overall time line and progression.

One great lifeportal really brings that idea of the now together. Jared Zimmerman has really simplified the idea and uses Flickr, Amazon, Yahoo!, Facebook, 43Things as well as other APIs to show more about his life, right now. 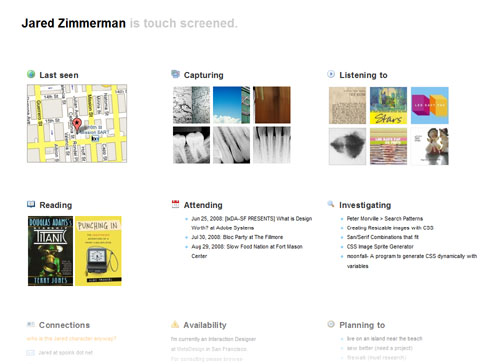 I’ve stumbled across a few other lifeportals that really show the strengths in this idea of separation of feeds rather than the integration into a time line.

Katy in Las Vegas – A very similar organization as Jon’s but uses Twitter, a blogging RSS feed, StumbleUpon and then shows her social network profiles and contact form in a similar manner, really keeping the flow of the page very consistent. Oh, and it’s a super cute look (is the girl in me showing again?) 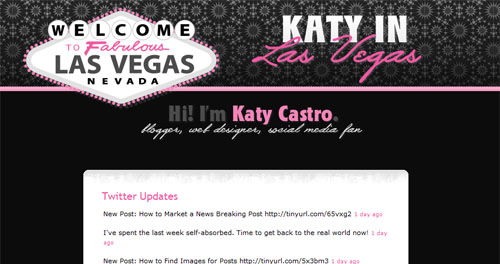 Which do you prefer to use for yourself or see on another person’s site?
Where do you think this trend is going? Do you think people are going to focus more on the now or the time line idea?

Terri is a 20-something living in Massachusetts. She got her degree in Interactive Media Design and is a LAMP developer. She's also got a severe photography addiction which takes up most of her non-work/programming/sleeping/eating/driving time.

15 thoughts on “Examining the Evolution of Lifestreaming Into Lifeportals”