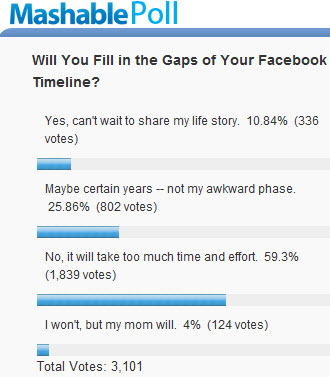 I followed this Poll on Mashable that asked if people planned to go back to fill in the gaps of their Facebook timeline. There were 3,101 votes at the time of this posting with ~11% stating they will and ~60% saying they won’t.  I find that 11% to be a pretty small number and surely not one that would make Facebook happy about the rollout. Sure it’s a relatively small sample size, and Mashable users may not equate to a mainstream Facebook user, but I think this number will be pretty close to reality. You can also argue that polling whether users will go back to update versus whether they will configure their timeline moving forward are two separate questions, I believe the answer will be about the same.

I think the majority of users on Facebook will not like this transition as they mainly use the service to communicate and share information with their friends in a simple clean interface and timeline will now become an obstacle to that.

I also felt the timeline should have been a supplemental view instead of a profile replacement and if only 11% of users embrace it, then it will most likely fail miserably. It’s a distinct departure from both the current utility and UI of the service. I went through my timeline and there are huge gaps and the primary reason for that is that I don’t use Facebook as the hub of my Lifestream. Most of my content was posted on other services. Most of photos were posted on Flickr, my status updates on Twitter, my videos on YouTube…etc. Unless you’ve been using Facebook as the central repository for all of your social sharing, or plan to do so moving forward, then it doesn’t quite make sense to be your Lifestream’s home base.

This blog was created because I was researching tools that gave me the freedom to aggregate the content I created to create a Lifestream across various different services I wanted to use. I think many people enjoy that freedom and don’t want to be confined to the limitations of a single service and its limitations to do this. Facebook does appear to have built in the hooks to offer us the ability to cobble together a few custom apps that we will be able to place on our timelines (such as the spotify app) to provide a way for 3rd party services to power our Lifestream on Facebook. However I’ve also stated in the past that mainstream users won’t go down this path and Facebook could presumably become a Lifestream for them. With the rollout of timelines we shall soon see what mainstream users think of it and whether it will resonate with them.

7 thoughts on “Facebook Built the Timeline, but Will They Come?”