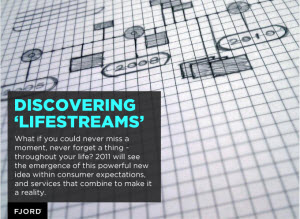 Today I came across the Fjord Digital Trends for 2011 which were published in January. Fjord is an international “leading digital service design consultancy”. Some of their trends for 2011 include “liquid experiences”, smart objects,  mobile payments, and digital magazines. I’ve embedded the Slideshare document below which is worth a look and has some pretty interesting thoughts of which many I agree with. Apparently their trends for 2010 were remarkably accurate.

The one trend I was excited to find of course was on Lifestreaming. If you go to slide 22 they have a section titled “Discovering Lifestreams“. Naturally I was very curious to see what they had to say.

Here’s their predictions dissected by me:

What if you could never miss amoment, never forget a thing -throughout your life? 2011 will see the emergence of this powerful new idea within consumer expectations, and services that combine to make it a reality.

I hope they’re right but I don’t think it will happen in 2011. I’ve been waiting 4 years for it to crack the mainstream and I think we’re still another couple of years out (see last paragraph).

In 2011 we will see increasing numbers of people uploading aspects of their life to the cloud. They’ll be able to combine this across multiple online services, generating meaning from data already online.

I fully agree with this sentiment. I feel that if services can demonstrate to users the value of sharing their data with others (2nd to last paragraph) to develop compelling functionality based on mashing up and analyzing it, they will draw in more users and possibly capture the mainstream. Currently we’re seeing this most notably happening with social content readers which seem to be sprouting up every week.

Hmmm, they show Memolane in their example which is a nice service, but sadly it was one of the few created last year and I don’t think we will see many new Lifestreaming services in 2011. FriendFeed was purchased by Facebook in 2009 and languishes now. Cliqset was also recently shut down in December of 2010. I feel these were two of the best and furthermore I’ve seen a huge decline in services created over the last 2 years. Unfortunately there hasn’t been good opportunities for startups to gain mainstream traction or monetize these services.

Additionally, we’ll find specialist LifeLogging services will continue to launch and enjoy wider take up in 2011. These services will also influence the mainstream as users become increasingly concerned about the power of social networks to reveal their personal histories.

Yes, I think Lifelogging which I wrote about last year is one of the niche areas of Lifestreaming that will take off in 2011.

Our children will learn a lot more about us than we did through a few old photographs – but we’ll need to ask ourselves if that’s a good thing. And there’s currently no service or standard to support this kind of reflective exercise on users’ online data.

Well Activity Streams aims to be a standard for this data. I’ve also said before and would argue that having my great great grandchildren learn about me through my Lifestream (see #4) would provide an amazingly better insight into who I was over viewing just photo albums.

Fjord believes specialised lifestream services will grow in 2011 as banks, health institutions and others start to provide the outputs that can be “mashed up” into lifestreams.

I hope Fjord is right. Of course even though I’m a bit of a pessimist now on usage and adoption, I’m still Lifestreaming’s biggest chearleader.