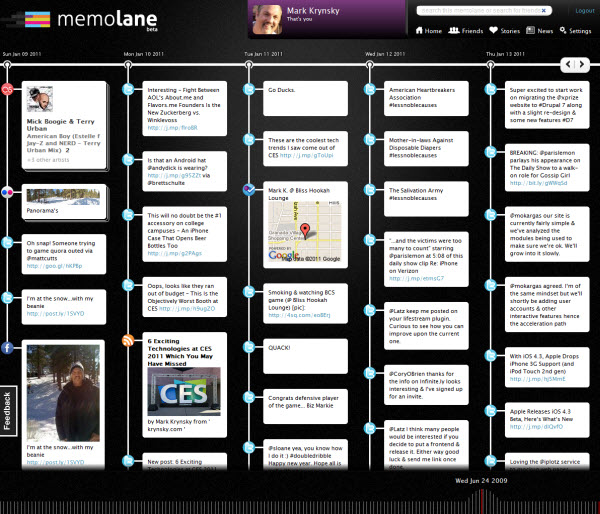 Memolane is a new timeline based Lifestreaming service. I have played with several of these niche based services with the likes of Dipity, Allofme, ThisMoment, and another newcomer Dather. Creating a visual timeline of your Lifestream may seem like a pretty straightforward process but it’s actually pretty challenging. Some data lends itself well while other items may not. How a service provides the ability to navigate the timeline can be done many ways. Creating a UI to do this well is no easy task.

Enter Memolane, a service that seems to have put a good amount of time and effort into creating a flowing method for navigating a Lifestream on a timeline. They manage to keep a simple simple but rich view of the timeline while also allowing quick and easy navigation to data from several years back. Each source data item is presented in a visual way. Each piece of data that is added is considered a “memo”. The memo’s appear as individual items daily like a leaves on a vine. Photos, RSS feeds, and image supported tweets display thumbnails, Check-ins display pushpins for complete daily activity on mini-maps. They also have smart aggregation for similar items. For instance multiple last.fm listens are rolled up into a single entry that can be expanded to display multiple items. Another feature of the Last.fm data stream is the ability to link songs to either an Amazon.com product page or your Spotify client should you be so lucky to have access. YouTube videos will play embedded within the site and Flickr galleries can be navigated within their respective memo’s as well.

Besides the method by which these timeline services display their data, another distinguishing factor is which services are supported. Memolane has good support with their lineup which includes Facebook, Twitter, Flickr, Picasa, Last.fm, Foursquare, Tripit, YouTube, and RSS feeds. Timelines are much better when based on a large body of historical data. Memolane does a pretty nice job here with the interface making it easy navigate to individual dates from several years back. The amount of historical memo’s will boil down to how far back each service provides data. In my case I have Flickr photos imported that dated back to 2003, last.fm activity from 2005, but my Twitter data doesn’t appear to have been imported from my early usage.

Besides just offering the data imports that are displayed chronologically, Memolane also has a feature called “stories”. This allows you to manually select memo’s that you hand pick from your timeline to craft your own story. So you could collect items such as tweets, check-in’s, photos, and videos for a vacation as an example. These stories can also be collaborations where you can invite other Memolane friends to add their memo’s. Speaking of friends, you can add them on the service so that you can easily find and navigate their timelines on the service as well.

On January 11th they released added privacy features which include adding more granular privacy settings which can now be set on individual services as opposed to all or nothing on your full timeline. Also, within the service there are also settings to have the full timeline private, only shared with other Memolane friends, or completely public. These privacy features can be set for the “stories” feature as well.


Memolane has gotten some attention as it was started by the original founders of Skype. The service is currently in private beta and I’ve been testing it since late last year. While they still need to iron out some kinks it’s a nice service. It has already been covered well by TheNextWeb as well as ReadWriteWeb. If you enjoy going back to old photo albums or journals then you will really enjoy this digital equivalent where you can just easily slide your mouse and revisit digital memories from years gone by.

The folks at Memolane have been nice enough to offer 200 invite codes to the readers of Lifestream Blog. Just visit this link and enter the invite code “lifestream“.