When I first started this blog in March of ’07 there were only a handful of custom scripts that allowed you to aggregate your social services. Over the months thereafter a large number of services launched to do this for you. In November of ’08 I wrote about how Yahoo, Microsoft, and Google were all slowly rolling out pieces to bring Lifestreaming to the mainstream. In Google’s case it was the creation of the user profile and the ability to link our social services to it. It was a small step towards their larger plan to enter the social streaming landscape.

Pulling data from multiple social services and having friends view and interact with it in one place has become an integral part of the web’s evolution. Google finally entered the social streaming space last week with the release of Buzz. With Google entering the market, it pretty much sends out the definitive statement acknowledging that social activity aggregation is here to stay.

I feel Google has closely watched the social aggregation phenomenon play out over the last few years whilst planning for a way to tap it, specifically as its become a critical data point for search. I’m sure I will write quite a bit about Buzz as time goes on but I wanted to focus a little on the decision to integrate it into Gmail. 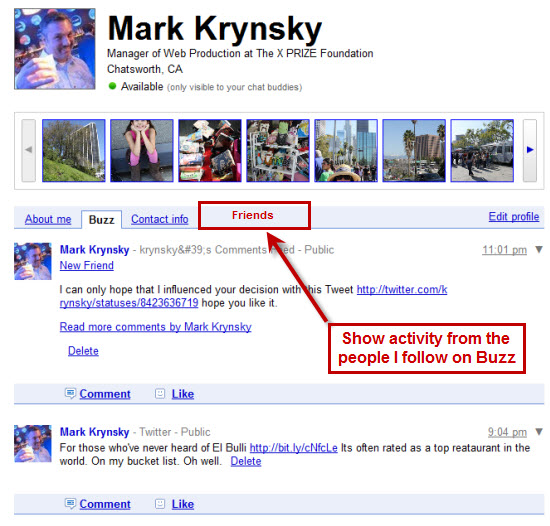 I don’t think it was a good idea for Google to try and build a thriving social media platform strapped on to email. There are a couple of issues with this. Email is still a very important communication tool used primarily for business, private, or small group conversations. It’s a place where we can get work and other things done without the distraction of social media. Do we really need social media to invade our productivity tools? What’s next a sliding ticker of Twitter updates coming across a column on Excel?

Besides, another problem is that to participate in this social circle you need to be a Gmail user. That alone eliminates a huge number of existing users that don’t have accounts and adds additional overhead which I imagine will alienate many new users. Sure the majority of techies use Gmail as their webmail client but it’s still in 3rd place overall as a mail provider much smaller than Yahoo or Microsoft.

Speaking of Yahoo, most of my tech friends are Gmail users and yes I have an account there but Yahoo is my primary email service. Many probably don’t know it but Yahoo rolled out similar functionality to Buzz over a year ago. While they do offer a standalone version of their social service, they also decided to integrate with email. Yahoo’s interface to add services is a thing of beauty and their profile pages have matured very well with a clean design and great functionality. So Google has apparently taken a similar approach but didn’t pay attention to Yahoo’s much better refinements.

Yahoo’s email integration has been pretty unobtrusive for me and has never really interfered with my existing mail usage. Yahoo does a good job of relegating the social data to its own tab and never forced any of its functionality to invade my email. The only time I’ve seen them do something that did cross that boundary actually happened in a situation I thought was pretty cool. 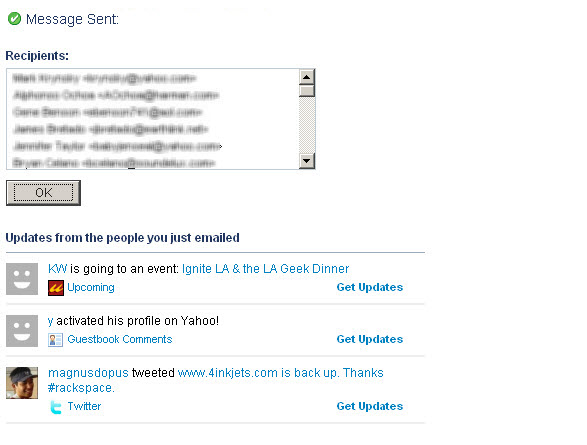 Yahoo mail provides the latest updates from the services users have linked to their profiles on the sent email confirmation page now. I think that’s an innovative way to leverage a user’s activity stream. I liked their thinking here but think they need a simple option to remove this feature for those that want to opt out.

Forced Gmail integration with Buzz is something that many people (including myself) have not been happy about. Yahoo got it right by not requiring email integration to participate in their social service. You have the ability to view all of your friends activities from an “updates” tab on your profile page. I think this is a very important distinguishing factor and wish Google would offer the same thing. They could do this by also offering a separate activity tab from our Google profile pages. I think this would provide a giant step in the right direction for keeping Buzz separate from Gmail and building out profiles to become a social destination at the same time. 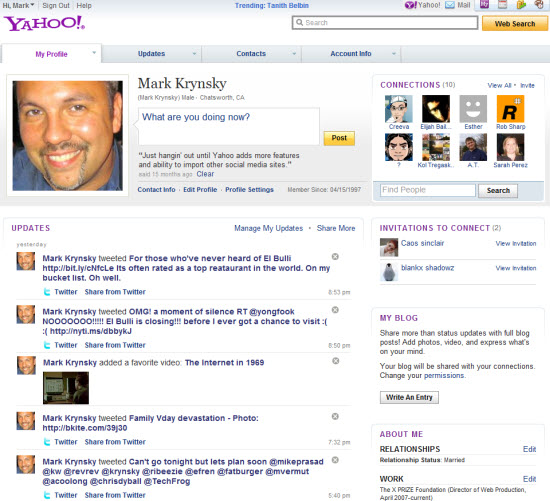 Besides forced Gmail intergration another problem we’ll see with Buzz is that it’s an aggregator which has proven to be a difficult sell to the mainstream. FriendFeed was a pioneer in this area and have created an amazing service to enjoy social streaming. Still they saw growth flatten and decided to sell to Facebook last year. Google has huge mindshare so it’s possible they could overcome mainstream penetration issues but the Gmail integration and what I feel has been a pretty poor user experience out of the gate isn’t a good start. I think more mainstream folks already happy with their current social network and in the current state of Buzz won’t be compelled enough to add yet another service. In the end a service is only as good as the number of friends you have participating on them.

As negative as I may sound about Buzz right now, I’m actually hoping they really improve it and will be rooting for them. For a non-beta release it seems very rushed and unpolished so I’m thinking they decided this product had to get out the door before they continue to lose traction in the social media landscape. As such I’m sure they will be allocating resources to continue trying to get it right. I will be an active user on the service and will continue to cover their developments for you here. You can connect with me on Google Buzz here.