My Experience and Highlights from the 2013 Quantified Self Global Conference 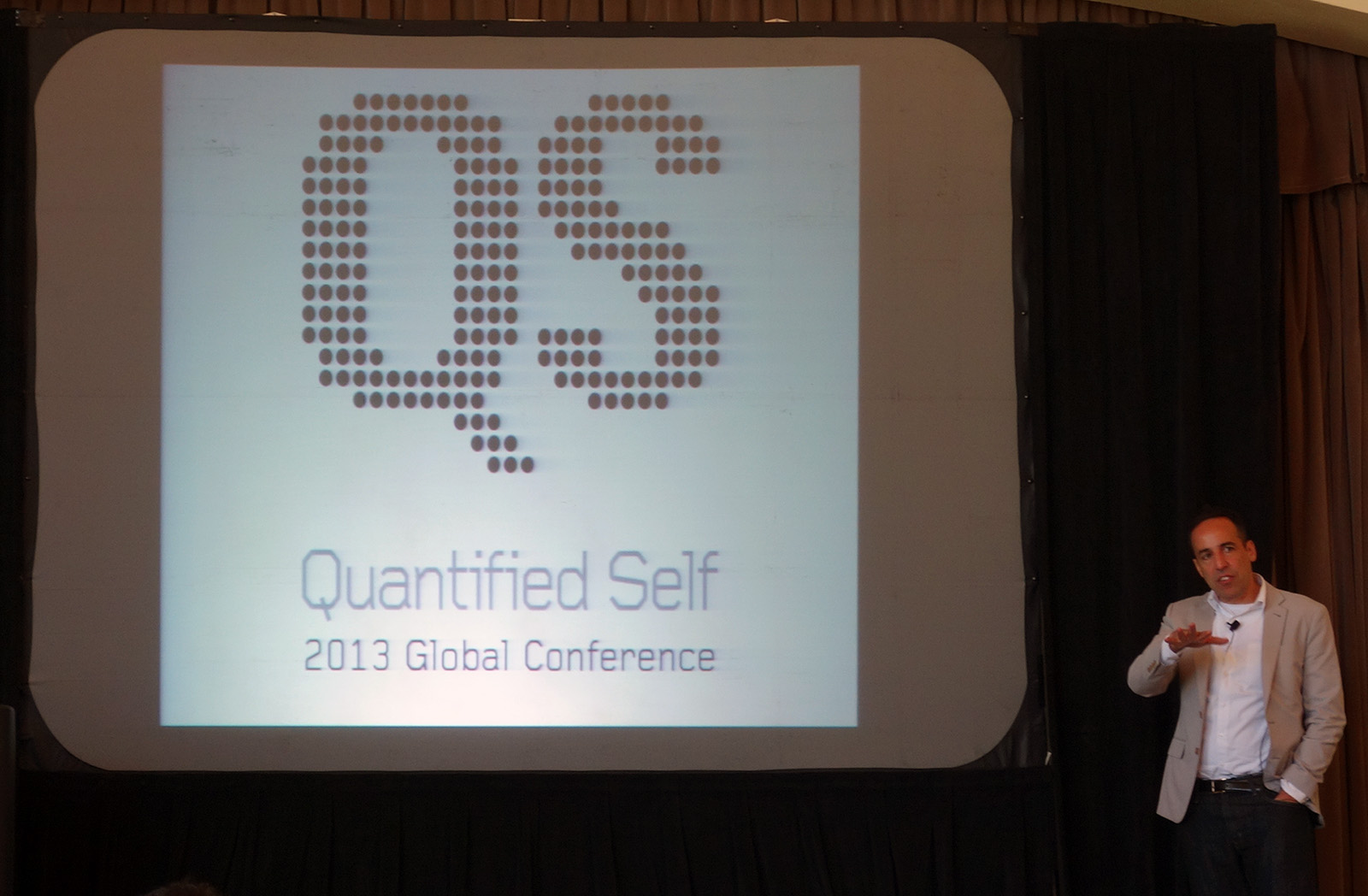 I’ve just returned from the 2013 Quantified Self Global Conference and my experience was quite amazing. I have attended several of the QS Los Angeles meetups but this was the first time I went to one of the official conferences. It was held at the beautiful Golden Gate Club at the Presidio in San Francisco. The conference had a limited attendance of around 300 people and much like my experience earlier this year at YxYY I feel that the smaller group really contributed to the intimacy of the event and made for great opportunities to meet and have discussions with other attendees.

The two day conference started day one with QS co-founder Gary Wolf giving a plenary that had us all in a single location to learn about the schedule and format of the conference as well as provided for some initial talks to get us started. From there we broke off to attend the various different tracks that were available. The main room that could accommodate all the guests operated like a typical conference talk where we had presentations and then could follow them with a Q&A session at the end. But the remaining talks were given in smaller groups and were tailored more as interactive activities and collaborative discussions. From the very beginning everyone is encouraged to participate and contribute. The conference had over 25% of the attendees giving presentations in this “carefully curated un-conference” atmosphere. During lunch the main room was used for Ignite talks and we ended each day together in the main room as well. This conference was very focused on attendee participation and contribution which is one of the things that made it so special.

Shortly after the plenary was completed I immediately took the opportunity to meet Gordon Bell which had been sitting in front of me. This was definitely a highlight for me as he’s been one of the inspirations for me creating this blog and I’ve covered him quite a bit here. After that I followed him to an area where he provided an open format Q&A at one of the various small tables that were set aside for various speakers to provide “office hours”. Gordon provided some of his history around lifelogging, how he’s been tracking health data, and showed us a recent graph he had prepared on how his heart rate had increased during a recent visit with a lawyer thanks to tracking using his Basis band.

From there I continued to another talk on lifelogging that was moderated by Cathal Gurrin of Dublin City University along with Andy Hickl who is co-founder of ARO/Saga and Aaron Parecki of ESRI. This topic of the discussion was around the unexpected effects of continuous lifelogging. There were many great stories and the discussion evolved to the point where many of us began providing what we log and why we do it. This was pretty enlightening as many people vary greatly around this and the stories from each of them was interesting. I think this is what makes it so challenging for apps and services to create a “one size fits all” model. Andy Hickl’s told us his story in which he had been diagnosed with cancer and was prompted to start lifelogging so he could create a digital record of his life to share with his daughter. I am a big fan of the Saga lifelogging app and at the QS conference they released a new version for Android that allows exporting which is a nice milestone. I spent some time talking to Andy pleading for new features that include creating a desktop experience (web service or local client to access data) as well as providing the ability to supplement the data it currently stores with personal data we store on our local machines. Kitty Ireland also from Saga gave one of my favorite talks around using lifelogging for storytelling. She detailed how her grandmother was an avid lifelogger by way of her diary in the 1940’s. She would meticulously log daily information such as location, meals and other data we use technology to do for us today. Kitty analyzed the data from the diary so she could explore her own life in the context of what her grandmother recorded and found some amazingly similar correlations.

Aaron Perecki attended another talk which has been a growing topic in the QS community around API’s. The implications around being able to access data, share it with aggregation services along with privacy implications all play a role when discussing the API’s available for device makers and services. Device maker’s API’s may not prove valuable if the data pulled doesn’t provide something as simple as a proper time-stamp. This is sometimes the case and without that it makes for a difficult time trying to draw correlations from other data sets. Beau Gunderson who is working for an EHR (Electronic health record) company called Practice Fusion which is looking to import data described the problems with time-stamps as well. This was one of several points Aaron made in a blog post he wrote where he was proposing a future for QS devices. He describes the notion that device makers should push data into our own personal servers where we can use external services to aggregate, analyze, and share data from. The ownership of data is something that the IndieWeb community has been doing for some time and they’ve recently been focusing on building a personal data architecture called POSSE. In 2011 I wrote about the Locker Project which appeared to be exactly what Aaron is describing in the way of a personal server platform to pull in external data with services that could be run against it. Unfortunately that project has stalled for quite some time but I’ve been told that it may get resurrected. I’m currently working on a blog post describing my thoughts around a framework for the ultimate lifelogging app that I’ll publish soon.

The conference had a room dedicated to sponsors and vendors to show off their products and services. One theme I saw quite a bit in both the talks and in the demos shown in this marketplace was the quickly increasing quality of progressive health related companies making their way into QS. I previously mentioned Practice Fusion and also recently wrote about the biggest EHR service announcing an API. It’s great to see how our health data may potentially open up a bit so it can be supplemented by additional services that could use our DNA, blood, and other external data so we can paint a more complete picture of our health. Speaking of other data I learned about uBiome which aims to capture data about our microbiome to help correlate the information around health conditions. Open mHealth is doing things around aggregating data to help us draw relationships and feedback loops as well. I’ve seen many services that aggregate QS data over the last 2 years but the ability to pro-actively notify us with simple insights is the next phase of QS that is still materializing and is what many see as the biggest hurdle preventing QS from going mainstream. In a related shameless plug, at XPRIZE we’ve created the audacious Qualcomm Tricorder XPRIZE to build a personal hand-held device to monitor vitals and actively diagnose 15 diseases. Scanadu, which is one of the teams entered into the competition, was a sponsor of the conference.

Fluxstream was another booth I visited which in the aggregation space which has a platform with a nice interface and visualizations but one distinction for them is that their software is open source. ProjectAddapp which also connects QS data together to let you create “data experiments” released a new version at the conference with updated visuals and the addition of new data correlations. Beddit aims to pick up sleep tracking where Zeo left off and is doing so with the help of former Zeo co-founder Benjamin Rubin as an advisor. I was able to see and hold one of the upcoming Narrative lifelogging cameras. It’s so much smaller than other similar cameras and is going to be very cool for passively capturing photos throughout our day. I saw a talk with wearable sensors in clothing from OMsignal who showed a t-shirt that could track ECG, stress level, and activity.  Another such shirt I heard people mention was Hexoskin which just completed a successful Indiegogo campaign. I find this new area to be interesting and perhaps less obtrusive in finding ways to passively capture our data.

Leading up to the QS conference the makers of Lumoback were looking to do an experiment whereby they would give a group of attendees their  posture monitoring device to wear and have their data publicly displayed on a leaderboard at their booth. Having recently been told by my chiropractor that I’ve been having major issues around my posture I was more than game to try this. After wearing the device for three days I was pretty impressed with how it helped me actively monitor and correct my posture. I also liked how it could calculate how much time I spend sitting each day and determine what positions I’m in while I sleep. I will write a more detailed post on the device at a later time. Fu-Chieh Hsu also had a device taking a different approach being worn on the forehead that he demonstrated using to monitor and improve posture which looked interesting as well.

The largest breakout talk that I attended was the one given by QS co-founder Kevin Kelly. He moderated a discussion whereby he presented topics around where QS is going in the next 10 – 100 years. One topic would be presented such as what did we think the negative aspects around QS in the future would be, and then he’d walk the room while fielding answers from all the attendees while someone was summarizing the responses on a poster-board. It was very interesting to hear so many broad and diverse thoughts around what the future of QS will bring. I believe Kevin was planning to summarize the collective themes presented around this collaborative discussion at the close of the conference plenary but unfortunately I had to leave early and wasn’t able attend this. Perhaps someone can summarize his talk in the comments and I believe the video of his talk will be posted in the future and I’ll update this post at that time.

So that concludes some of my key take-aways from the conference. I met so many great like-minded people that to share and learn from which made this event really special. If you have yet to attend a QS meetup you really should. It’s the community of people that really makes this “movement” such a great thing. Below are some additional resources I’ve found from the conference and I’ll continue to add to this list as I find content.