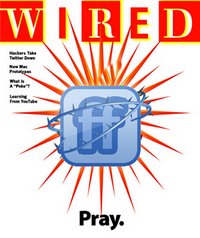 Its now been well over 24 hours since the initial shock that FriendFeed has been acquired by Facebook. I’ve been watching all the reactions originating both by the coverage surrounding the deal as well as the user community on the FriendFeed site itself. It’s been a pretty surreal two days that have included a huge bag of reactions and emotions across the web. Here are my current thoughts on the situation.

I first joined FriendFeed in October of 2007 just weeks after they launched in private beta. I remember after my first visit not being very impressed with their initial release and quickly dismissing it as another one of the many new Lifestreaming services to launch at that time that didn’t really bring anything new to the table. That changed over just a few short months after and when I decided to create the Lifestreaming services comparison matrix in Feb of 2008 (I really need to update this) it had risen to become the most feature rich service out there.

It was also around this time that I started to become very active on the service. FriendFeed chose to pave a new path beyond solely being a Lifestreaming service. They quickly became a differentiating service when they decided to go down the SocialStream path and focus on creating conversations around the items that made up people’s Lifestreams. They did this by launching two features that would become their defining ones to achieve this. First they created a very quick and simple way to allow people to create comments on items. Then they changed the logic of just displaying a reverse chronological stream of items by introducing the “like” feature. As users of the service would click on the like button (or comment on them), that item would re-appear withing peoples streams. These two features (which were both subsequently copied and implemented by Facebook) are what propelled them to become a very powerful conversational platform that I feel has to this day not been matched in another service. 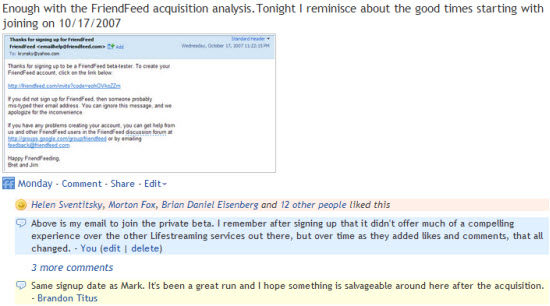 So fast forward to yesterday. I go to lunch and when I return saw a tweet (don’t rem from who) that said FriendFeed was acquired by Facebook. So the first thing I do is check the calendar and make sure it wasn’t 4/1 and then quickly start searching for more info. It didn’t take long to verify the news. I was shocked. My mind started to wander about what this would mean for the FriendFeed sites’ future and I immediately didn’t feel it would be good. I started to feel a bit numb. I had never invested the amount of time and passion in a web service as I have with FriendFeed. For me it has been the human component and friendships I have made on the the service that has made it so great. FriendFeed lowered the barrier of communication so as to make it easy to interact with many of the web’s technorati. It was FriendFeed that provided me the ability to trade dialog and befriend them along with so many other great people in a way that I haven’t been able to anywhere else. The thought of this going away has definitely caused some anguish.

The future of FriendFeed is still uncertain but from a telling paragraph in the interview by TechCrunch as well as the post over at Inquisitr, it would appear that the chances of the site continuing are slim. Yesterday Paul Bucheit stated that he’d do the best he can to ensure that the community is treated right and I believe he will. But he also acknowledged his personal limitations in stating that he can’t make any promises on other’s behalf. I pointed out in Paul’s thread a few things that I’d like to see. This included the ability to export our data as well as a tool to import our friends to Facebook. I also voiced my concern regarding the state of their in-house ff.im short url serviced used for links posted through the service. No word yet on any of these. 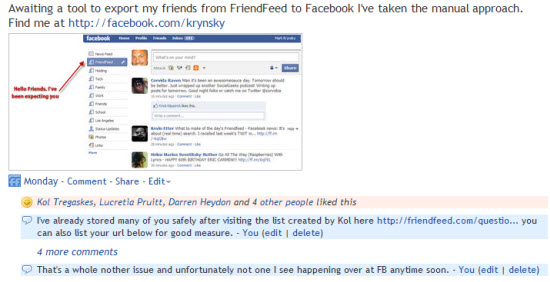 So today after much of the raw emotion started to subside and the reality of the situation started to settle in people on FriendFeed started talking about alternatives as well as other options. ReadWriteWeb did a fantastic job today on this topic. First Sarah Perez identified Streamy.com as a possible new destination, then Marshall Kirkpatrick writes an eye-opening piece on whether now is the time for the creation of a distributed social network.

Both of these were big topics on FriendFeed today. Many started talking about and trying out Streamy. Apparently so many users started testing the service that Ben Parr discussed that it buckled for a little while under the pressure. I like what Streamy has done recently to re-invent itself but they have a difficult decision to make regarding whether to tweak their service in hopes of acommodating the potential FriendFeed user base or continue with their planned initiative prior to today’s limelight. I’m friends with Don Mosites who is one of their founders and I will no doubt be talking to him about this as well as previous features I’ve been pushing him to implement which aren’t related to FriendFeed.

I love the idea put out by Marshall regarding a distributed social network but feel that the barriers to entry for such a service are pretty high. Activity Streams, DiSO, and Data Portability are all fine initiatives but they have been plodding along at a slow pace and I don’t believe that they are being held back by technical issues but  by beauracratic business obstacles instead which are much harder to overcome. There seems to be some headway being made however from what I’ve read recently about them and perhaps the FriendFeed situation will provide some help to further these along. One other interesting possibility was suggested by Mark Rizzn in a post where he posits whether WordPress could create an alternative replacement as well.

On FriendFeed there have also been conversations about building an open distributed service as well. I have even joined these conversations and pointed them to the collection of scripts and other open source Lifestreaming tools that I have found over the last 2 years, but I don’t think that most of the FriendFeed users will wait for this to come to fruition and will likely find a new place to call home before this could become a reality.

Many podcasters scrambled yesterday to record impromptu shows surrounding the FriendFeed acquisition. I don’t recall any other site purchases ever causing such a large amount of people to want to react so quickly. One of the best ones I heard was the Social Geeks Podcast which included Louis Gray, Wayne Sutton, Jeff Smith, Corvida, Sarah Perez, and Chris Miller (aka IdoNotes) all of whom are very active FriendFeed users so their thoughts and perspective were especially enlightening. One things that I had been thinking about personally and had my own thoughts on was why did FriendFeed sell? They repeatedly stated that they had no interest in selling or cashing out whenever they were interviewed and I believed that. I think Louis nailed it on this podcast (covered starting at 28:40) when he stated that the writing was on the wall with both the eminent release of Google Wave along with the continual copycat advancements made by Facebook. So it would appear that the sale was more due to concerns with their viability in the future and wanting to make a successful exit while they were still on top.

Dave Winer and Marshall Kirkpatrick also recorded their Bad Har Day podcast where they took in calls to discuss people’s reactions. Dave also wrote a very interesting post spurred by the podcast here. Lastly the fan created FFundercats podcast (not online yet) recorded their very emotional reactions to the news and were also joined by Louis Gray.

One thing I’m pretty happy about is the fact that I chose to use the excellent WordPress Lifestream plugin (also the author is working on a new Lifestreaming service to launch soon at Lifestrm.com) for my personal Lifestream on my blog. By using this plugin I store all of my Lifestream data in my WordPress database ensuring that I own and don’t lose any of that data. And speaking of data, I reached out to Rob May who is the founder of Lifestream Backup to find out if they currently supported FriendFeed. He told me that they currently didn’t but had been getting a large number of requests to do so. So today he wrote a post looking to see how strong the interest is and to see if it would move to the top of the feature priority list.

Since I’m on the topic of blogs, I’ve also been paying attention to Chris Saad and his recent post on Blogs are Back is very interesting. The advancement in so many tools including Echo pose another strong possibility that many people may consider reverting back to their blogs and utilizing the power of these tools for the conversation.

So where do I stand? Well FriendFeed is still up and running and chances are that I’ll continue to use the service until the last server is shut down. That being said, I am definitely keeping my eyes open for other possible options but at this point in a very strange way I almost feel relieved and ready to submit to the almighty Facebook primarily because its been challenging having to participate on an extra service and being able to consolidate that makes my workflow much easier. I know crazy talk and I might change my mind tomorrow but I do feel that way a bit right now. The one wildcard for me at this point that I’m really looking forward to is Google Wave. The buzz around it seems amazing, and I’m impressed by what I’ve been able to see. If anyone can get me an early invite please send it over as I’d like to see what all the fuss is about and see if it lives up to the hype.

33 thoughts on “My Thoughts on the Current State of FriendFeed”