Tanzim Saqib has an impressive record as a developer. He has worked for several companies including Pageflakes and is currently at BT. Tanzim has released an open source framework to create a fully customizeable, themeable and easy to configure Lifestreaming app built on ASP.NET 4. This is only the second .NET based open source Lifestreaming project that I have seen. The first was another impressive app called Amplifeeder which I wrote about in February. 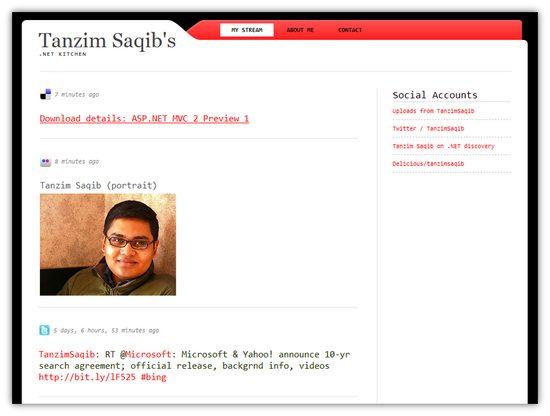 The system was designed to be easily extended by offering a plugin architecture. Tanzim has provided a very detailed and lengthy post announcing this release that includes screenshots, diagrams of the classes used as well as code snippets. It really looks like a very interesting project worth looking at. The only issue though is the fact that it can be very difficult to find a web host that currently supports ASP.NET 4 which is currently in a beta release. I have recently become aware of the Microsoft Web Platform which I haven’t looked into yet but would imagine could be used to host MyStream. Perhaps someone can shed more light in the comments.

Tanzim has voiced an open call for all developers who are interested in joining the MyStream development team. He’s looking for many facets of contribution including writing plugins, improving the scale and architecture, fixing bugs and helping design attractive themes. You can find the MyStream project hosted  at mystream.googlecode.com