I was recently contacted by Jon Paul Davies about a new open source Lifestreaming app called AmpliFeeder which he’s working on. He’s a longtime reader of the site and was nice enough to provide me with an early look at it.

First off it will initially be a downloadable app which you will need to install on your own server. Also, the backend is written in ASP.NET with the front end being AJAX/Javascript. The backend really only makes up about 10% of the code and can be easily ported. In fact, he plans on also releasing a Ruby on Rails and Google App Engine versions as well, and feels ports to other languages shouldn’t be very difficult. Before you get too worried, there will also be a hosted version for those that don’t have the option of a server based install. 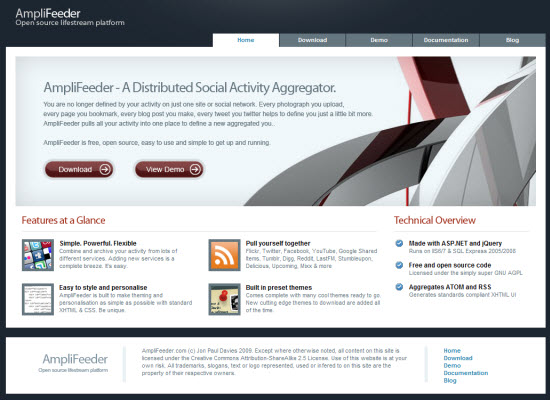 I’ve been testing AmpliFeeder for a few days and really like what I see so far. There are still quite a few refinements to be done and I have been providing Jon with feedback but he seems eager to take care of all issues.

There is currently support to import data from 16 services as well as adding multiple RSS feeds. Below are shots of my Lifestream using some of the 9 themes that are currently available. Changing themes is as simple as going to your settings menu and choosing a new one from the dropdown. 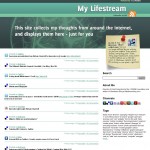 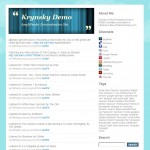 Some other features are the ability to auto generate tags from your Lifestream data using the Yahoo API service. This is the first time I’ve seen an app or service utilize this method of tagging and I must say it makes for some interesting, if not chaotically random results.

There is an internal commenting system, search engine, a place to add Google Analytics tracking, and some nice graphical reporting of your Lifestreaming activity. He will be implementing OpenID authentication for the commenting system after the initial release.

Another important function of the app is the portability of the data. This will allow for users of the hosted version to migrate to the self-hosted app at a later date if they choose to. Jon is still working out the details on this (still researching formats covered at dataportability.org) but presumably the data will be provided in a standard format that would probably allow use elsewhere as well.

AmpliFeeder also provides a clear JSON API between the front and back ends, making the front end functionality simple to wrap any other lifestream service, but with the benefit of the simple theming engine AmpliFeeder offers. The plan is to have FriendFeed and Activitystrea.ms wrappers very soon after launch. The Activitystrea.ms support is interesting as it’s the first open source Lifestreaming app I’ve seen offering this. It’s an exciting new project that I’m looking forward to. 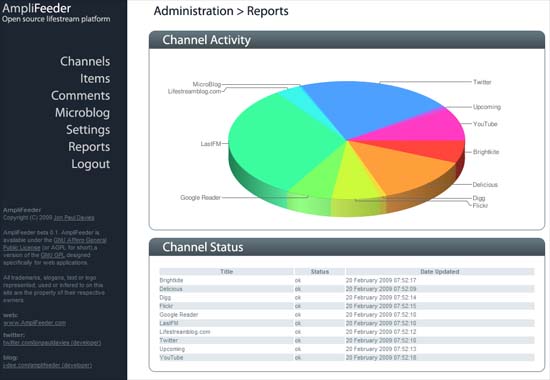 Jon also can’t stress enough how easy AmpliFeeder is to personalize. HTML and CSS skills are really all you need to create some wonderful designs. His primary focus has been design and ease of use. He has really put a great deal of effort into the visual presentation part of Lifestreaming and it shows.

There are no doubt some similarities to SweetCron and I’m sure comparisons will be drawn. I love what SweetCron did for Lifestreaming and there are some pretty nice uses out there. Unfortunately there hasn’t been much support from the open source community providing updates and new functionality. This is essential to any app to thrive and grow.

So now we have a new kid on the block to watch for. Between offering both a downloadable app (to come in many language flavors), having a hosted version available with data portability, and offering gorgeous themes, it’s a worthy new entrant. Time will tell whether it gets the support and community to distinguish it as a popular new Lifestreaming platform.

Jon tells me that he expects the software to be released within the next 30 days. He is the sole developer on this project and he’s hoping to find more contributors. You can reach Jon on Twitter at @jonpauldavies and monitor the site at www.amplifeeder.com as well as on Jon’s blog at www.j-dee.com

AmpliFeeder from jon on Vimeo.

Jon has posted more information and several other screenshots on his site here.