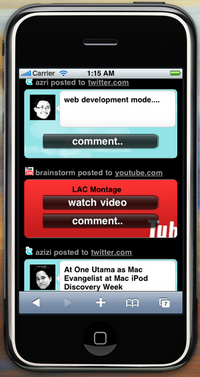 If you’re not familiar with SweetCron, it’s a very popular opensource web app that was allows you to self-host your own Lifestream. Released just over a year ago, and developed by web designer Yongfook, it was designed with beautiful aesthetics in mind. It has become one of the most popular Lifestreaming apps out there for individual use and if you have been watching the Lifestream Galleries that I frequently post where I highlight some of the best custom Lifestream galleries on the web, you’ll notice that many of them use SweetCron.

Well I’ve recently come across a developer named Wan Mhod Azri who has been blogging about and releasing all kinds of mods for the SweetCron platform. His latest release provides a tutorial for creating an iPhone compatible SweetCron theme. But this is just the latest in many projects he’s worked on for SweetCron.

Here’s a few others

If you are a SweetCron user then you are definitely going to want to visit Wan’s site and follow him on Twitter to learn more about ways to tweak your SweetCron.

2 thoughts on “Pimp Your SweetCron with Multi-User Functionality, an iPhone Compatible Theme, and more”