I saw a tweet from Jason Schuller a few days ago where he announced a new Lifestreaming WordPress theme being released called “Social Life”. He included an image of the theme which I’ve provided below: 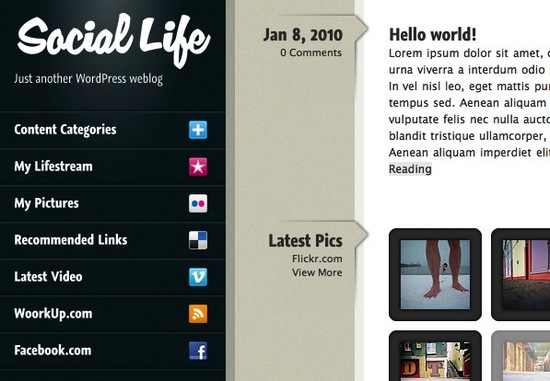 If Jason’s name seems familiar it’s because I’ve written about him several times. He designs premium WordPress themes over at Press75.com and last year released a free Lifestreaming theme. He also recently updated his personal Lifestream.

Jason let me today that he was finishing up documentation and the demo for the theme. It looks like another nice addition to the ever-growing list of Lifestreaming WordPress themes. I’m looking forward to this latest release and I’ll keep you posted on when it drops.

Jason has released a live demo of the theme that you can now see here. Along with the live demo he also posted an image of the admin options for the theme here.

After playing with it for a little I’m very impressed. This offers a very nice navigation experience and I like the segregation and ability to filter by content type. The way blog posts are presented as you drill down through the menu is also very cool. I’m also usually not a fan of fluid width designs but this theme does a nice great job of dynamically going to 2 column instead of a single one on my 1920 px width display. If I had to complain about anything it would be that I’d prefer a lightbox effect for the photos & videos to keep the user on the site instead of navigating away. Overall though this is an awesome addition to WordPress Lifestreaming themes and I’m eyeballing using it myself.

The theme is now available. It costs $75 and you can get more details on it here. Below is a screencast created for the theme

Note there are many Lifestreaming themes available for WordPress and I’ve provided a list of all of them here.