I’ve seen some recent focus on the beautiful designs around lifelogging and quantified self data. So much of the raw data is either boring spreadsheets or rudimentary graphs that when you see design implemented to visualize the information it makes it much more appealing to pour over. Of course some of the design requires that the data has some logic behind it and drawing meaningful insight is the holy grail of analyzing this data.

A recent website created by  Anand Sharma really caught the attention of many folks. He’s taken the same data we are all collecting and created a beautiful and interactive website around it. He’s written several blog posts describing the inspiration and the process he went through to create the site. You can read part 1 here and part 2 here. TechCrunch also wrote a post about his site as well.

I first wrote about information designer Nicholas Felton back in 2009. He creates an annual report around his lifelogging data that he dubs “The Feltron Report“. He’s been doing this since 2005 and each year he iterates it by modifying the display of data and design in visually beautifully ways. This year Nicholas is trying to help us achieve beautify from our data in the same way with the release of an iOS app called Reporter which pings you daily for data input that in turn will later generate visualizations around the data. This is his second tool aimed to help us with his first being the Daytum web service which also provides more broad data visualizations. 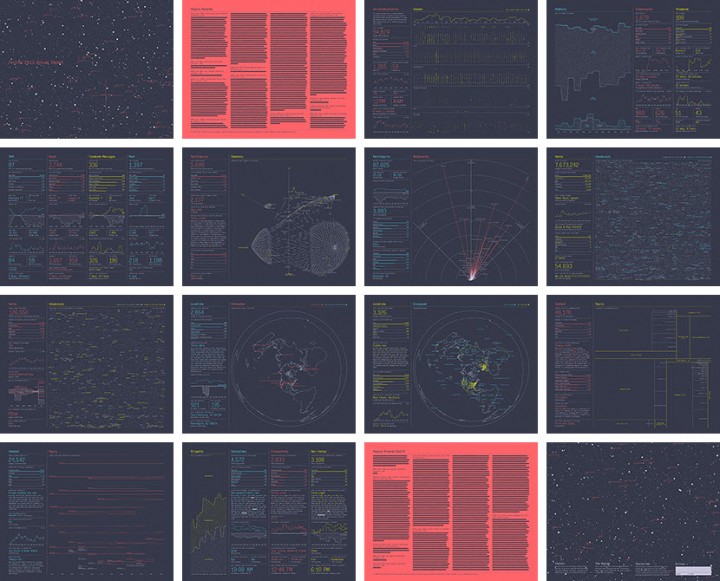 I’ve seen some recent coverage of Nicholas with a nice post on the Motherboard website at Vice and even better was this video interview with him done by The New York Times were he gives us a behind the scenes look into his data collection and quantified life. It’s a great video which you can watch below or visit the New York Times site to view. Vizify was a service that I wrote about that provided nice visualizations by connecting your account to their service. Unfortunately they’ve been acquired by Yahoo and the service isn’t available anymore but I really hope that we start to see more ways to view our data in visually beautiful ways in the near future.

2 thoughts on “Beautiful Visualizations of Lifelogging and Quantified Self Data”